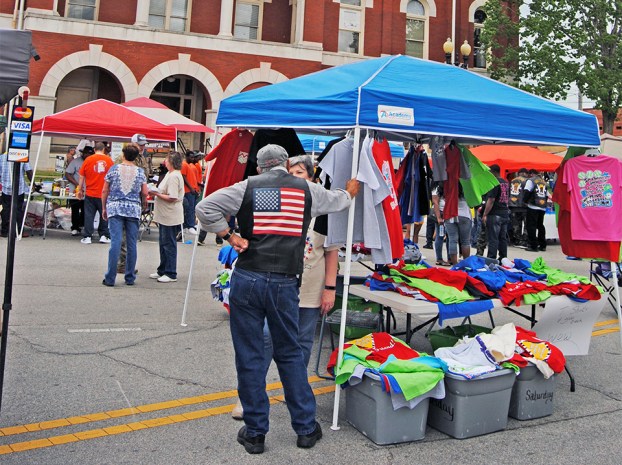 Wayne Clark | Times-News BIG DAY IN LaFAYETTE: A sizable crowd was on hand for Saturday’s annual LaFayette Day in downtown LaFayette. Court Square was lined plenty of vendors, Attendees had plenty of good food to choose from.

LaFAYETTE — For much of last week, there had been ominous forecasts for stormy weather for Saturday. With the rain holding off till early Sunday morning, and Saturday afternoon’s weather being cool and breezy, a better-than-expected turnout was on hand for the annual LaFayette Day fundraiser for Valley Haven School.

“I’m sure the beautiful weather helped us with the crowd,” said Valley Haven Executive Director Craig Brown, “and we’re grateful for that. We had some tremendous participation and that made for a great day for Valley Haven. We were able to raise over $14,000 toward this year’s overall goal of $100,000.”

One of the more popular features of LaFayette Day, the annual car show, drew close to 80 entries. The cars that had been entered were beautifully restored, and lots of LaFayette Day attendees marveled up close at each one of them.

Scott Willingham of Scott’s Towing brought his Smokey and the Bandit car. (He recently showed it to Burt Reynolds in Palm Beach, Fla. and had him autograph the dash.)

Scores of children enjoyed rides on a miniature train though the downtown streets and jumping up and down on the inflatables that were there.

Firefighters from five different departments took part in a fireman’s competition, and some outstanding live entertainment took place on a stage just outside the main east-side entrance to the Courthouse. The Valley Haven singers captured everyone’s hearts with their version of “You Are My Sunshine,” clapping and singing and urging everyone to join in with them. Many did.

“The LaFayette Committee and Valley Haven School would like to thank everyone who had a hand in making this year’s events a success,” Brown said. “We want to give special thanks to to the many merchants and sponsors for their generous contributions and donations. Also, we say a special thank you to Mayor Barry Moody and the LaFayette City Council and the Chambers County Sheriff’s Department.”

Brown said that the next big event for the Hike/Bike/Run will be the Sheriff’s Call-In Show, which will be on WCJM, starting at 6 a.m. on April 22.

The annual Valley Haven Auction will be taking place at 5:30 p.m. EDT on Friday, April 27.