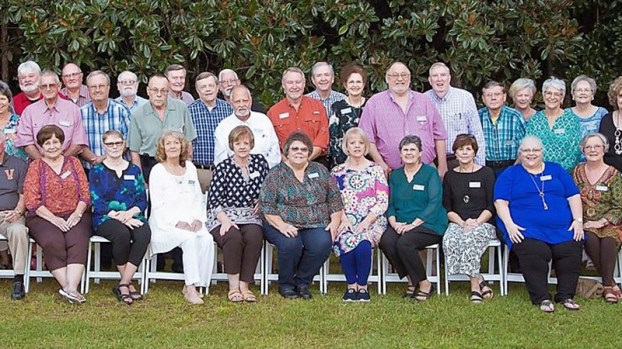 VALLEY — The Valley High School Class of 1968 celebrated its 50 Year Class Reunion on Saturday, Oct. 13, 2018, at Fairview Clubhouse in Valley. Forty-nine classmates, along with spouses and guests, enjoyed a great time of food, fellowship and entertainment.

Following a group picture, class members entered the porch through doors decorated with wreaths of yellow forsythia. Colorful pillows and throws decorated the porch chairs and couches. A “trip down memory lane” display consisted of photos, newspaper articles, a class ring, a charm bracelet, calling cards, yearbooks, senior trip pictures and itinerary, graduation program, a VHS megaphone and a blue wool blazer worn by VHS athletes when traveling to away games. Pictures of the 28 classmates who have passed away were displayed on a memorial table.

Kathryn Waldrop began the ceremony with comments about the group’s “50 year dash” from 1968–2018.  She noted that, while a common history bound the class together as it stepped from high school into the “dash,” each class member now has their own stories to tell.

The reunion was a time to share and celebrate those stories, as well as to reminisce about old times. While the 60s were a time of social and political change, with desegregation and the Vietnam War being among the most controversial issues, the class said the community insulated it from much of the conflict while instilling in us the knowledge, confidence and tolerance to make a positive difference in the changing world.

Classmates Eddie B. Winston and Marvin Reese, both of whom are deceased, were the first black graduates of Valley High School, and it was noted that the transition was very smooth.

Veterans, most of whom served in Vietnam, were recognized and applauded. Throughout the opening comments, other classmates interjected their recollections and observations, further demonstrating that our collective memory is one of growing up in a supportive and nurturing community.

Class president, Barry Bledsoe, welcomed the group and spoke briefly on things he had learned in the last fifty years. Suzanne Stanfield Harris, class secretary, led singing of the alma mater. Class vice president Danny Hale led the group in singing Hooray for Valley and Hale’s Yell.  Kathy Bonner Herren and Sammy Newton entertained as the WRAM radio station. The mock radio program was sponsored by Sno-Cap 1 & 2 and Valley Bowl, old haunts of the class. A highlight of the evening was the spontaneous sing-along that occurred during Sammy Newton’s guitar rendition of “Yesterday” by the Beatles.