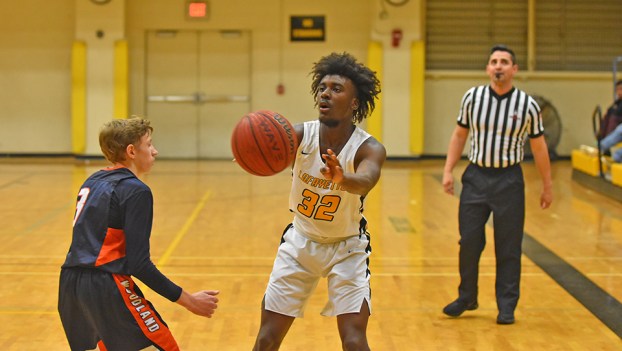 BIG WINS: LaFayette’s Xavier Holloway makes a pass against Woodland on Tuesday night. The Bulldogs breezed past their opponents in a 81-30 victory in the opening round of the area tournament. Photo by Rashad Milligan

LaFAYETTE — It was a total team effort for the Lafayette boys basketball team in the Bulldogs’ 81-30 win over Woodland on Tuesday night.

“I was pleased with our effort,” Lafayette. Boys head basketball coach Obadiah Threadgill said. “We played extremely hard. We defended well, we shot the ball well, we shared the ball on offense and we’re starting to shoot the ball a little bit better. “

All 14 Bulldogs who played on Tuesday night scored, led by Markevious Moore, who finished with 15 points in the victory.

“I’m happy with our depth,” Threadgill said. “That’s going to be very important for us in Class 2A, where most teams are playing six or seven guys and we’re going to be playing 11 or 12. If we can get to a longer floor like at Jacksonville State, then our athletes having the speed, length and depth that we have, should help us reach the final four if everything goes according to plan.”

A team whose Achilles heel has been slow starts this season, LaFayette got off to a 14-0 start against Woodland in the opening round of the area tournament. Threadgill credits the fast start and full-game effort to the team’s tough road loss at Handley. To end the regular season last week.

The highlight of the game came in the fourth quarter when senior JaQuavian Boston-Gaines threw down the first dunk of his career with an emphatic two-hand slam dunk. After the jam, Boston-Gaines hung on the rim, slap his shoes against the backboard and pointed to his teammates on the bench before coming back down from the rim.

The senior was then ejected from the contest.

“When you get to levels like this as a football or basketball team, you kind of have to have your knucklehead,” Threadgill said. “He is definitely that for us. I’ve been working with him for a long time since he was in the seventh grade. Him being a senior right now, I’m not trying to change the person he is. He is who he is, and I’m not trying to change that. He’s perfect for our team.

‘That’s the first dunk of his career. He’s the best athlete in our school. He can jump out of the gym like a kangaroo. I’m okay with him being a little excited, but that was ridiculous. For him to get ejected his senior year, having to spend money  that’s unnecessary, I expect him to make better decisions.”

LaFayette will host the area tournament championship on Thursday night.