LaFayette boys run over Woodland in 81-30 win to… 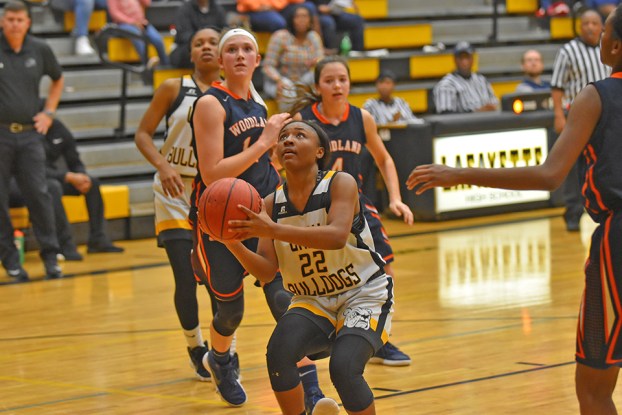 LaFayette — The LaFayette girls secured a spot in the state tournament after a 61-47 win against Woodland in the opening round of the 2A Area 9 tournament on Tuesday night.

The Bulldogs trailed by three after Woodland sophomore guard Kenslie Simpson drilled a three-pointer at the top of the key with three minutes to go in the third quarter.

LaFayette brought the ball back up and came away empty-handed on the next possession. Coming back on defense, Bulldogs sophomore Feliah Greer clapped her hands as LaFayette settled into its zone defensively, encouraging her teammates to keep their spirits high.

The Bulldogs went on a 21-0 run after the positive reinforcement from the team’s leading scorer.

“They never gave up,” Lafayette girls head basketball coach Michael Bratcher said. “The emotions of the game never got to them too much. [Woodland] came out with a gimmick defense, and it’s something that we have not worked on, something we haven’t seen and we struggled in it.”

Woodland double-teamed Greer the full length of the floor on every offensive possession on the night. The only attempts the sophomore could get were either on fast break opportunities or after she grabbed offensive rebounds.

The defensive tactic forced LaFayette to change its entire offensive strategy, and the Bulldogs committed many turnovers in the first three quarters as a result.

“I think some of the girls didn’t realize how open they were out there,” Bratcher said. “When we ran our [offensive] sets right, they were getting easy shots, but they were going against like there was almost too much there instead of saying ‘I have a wide-open lane, let me take it to the hole.’ We settled for jump shots, and there’s a reason why they’re in that gimmick defense, it’s because we’re not a jump shooting team.”

The Bulldogs went on their run thanks to getting some easy transition baskets after turnovers, which built the team’s confidence into more shots like sophomore Nadya Heard draining a mid-range jumper at the third quarter buzzer.

“We can’t just have the Feliah show,” Bratcher said. “It was obvious. We have to have other players scoring.”

Despite being denied the ball on many possessions throughout the night, Greer still led the Bulldogs in scoring with 21 points. Junior Monkeliyah Morgan also finished in double digits with 15 points on the night. Senior Daylan Wright, sophomore Ebony Williams and Heard also contributed in the victory. Sophomore Alahbra’J Todd scored 6 points before tweaking her ankle in the fourth quarter. Todd is expected to be out at least for the remainder of the week, Bratcher said.

The Bulldogs will face Ranburne in the area tournament championship game on Thursday night.