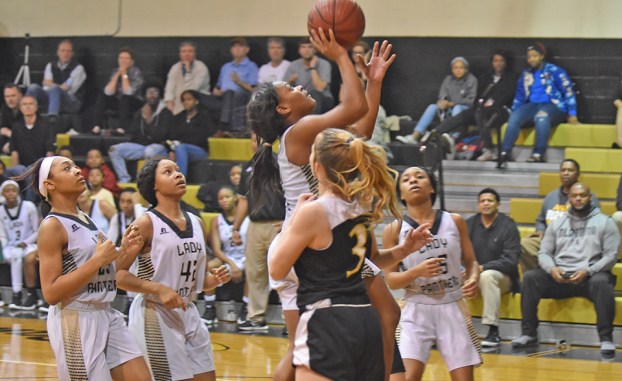 LAST PUSH: Lanett senior guard Jaci Howell puts up a shot in the lane during the fourth quarter of Lanett’s first round playoff matchup against Westminster on Monday night. Photo by Rashad Milligan

LANETT — The Lanett girls basketball season ended in a 56-45 home loss to Westminster School at Oak Mountain on Monday night.

“This is the reality of life,” Lanett girls head basketball coach Charlie Williams said. “It’s hard like that sometimes. It takes curveballs sometimes.”

The Panthers (16-8) fought to come back from behind against the Knights (19-8) since late in the first half.

Lanett got a big basket for an and-one opportunity from Alysse Madden with 1:39 remaining in the second quarter to get the crowd engaged and cut the deficit to nine. The Panthers then forced a turnover and headed to the free throw line after recovering a steal. After sinking both free throws, the Panther faithful “de-fense” chants got louder as Westminster turned the ball over again, missed a shot and turned the ball over again before being bailed out by a traveling violation on senior Makaiya Broughton who was on a fast break after recovering a steal.

Despite the momentum that Lanett built up in this minute-swing, Westminster ran down the clock and hit a late corner three to give the Knights a 24-16 lead going into halftime.

Lanett gave Westminster various looks defensively to climb back into the matchup throughout the night. When the Knights could get the ball behind the Panthers’ defense, most of those possessions ended in trips to the foul line or crucial baskets.

Senior Jaci Howell put Lanett on her back in the team’s many comeback attempts in the first half, bringing energy to the floor with her drives to the basket, steals, rebounds and three-point shooting in hopes to prolong her high school career.

“I’m proud of all of my girls. They laid it on the line tonight,” Williams said. “Some things didn’t go their way, but I’m super proud of them.”

Late in the third quarter, the Panthers visibly grew fatigued on the floor from the comeback attempts.

Williams made a mass-substitution where every player with the exception of Howell catching a breather.

Westminster senior Rachel Price drained momentum-killing three-pointers for the Knights each time the Panthers cut the deficit to three possessions.

“The difference is a couple of our shots went in and came out,” Williams said. “A couple of theirs went in. It’s just the reality of life like I told them.”

In the final moments of the game, Howell was subbed out and grew emotional on the sideline as Williams consoled her. She and Broughton are two of the team’s five seniors along with Crystalyn Sprayberry, Siana Huguley and Ambria Jackson.

“I’m proud of my seniors. They laid the foundation of my program,” Williams said. “When I first took the job a couple of years ago, girls didn’t want to play basketball at Lanett. All boys wanted to play.

My five seniors laid the foundation of where Lanett is today.”

Westminster now moves on to the Sweet 16 to face Pleasant Home High School.