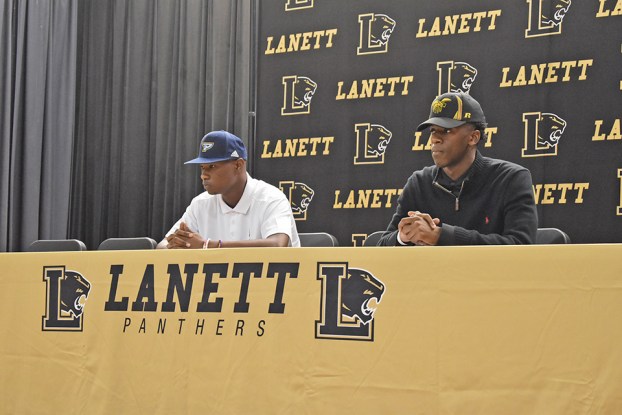 “Ever since we came in 2009, we have not missed a year without a student-athlete having an opportunity to further their career and go on to play at the collegiate level,” Story said. “These two young men have truly exemplified what it means to be a student-athlete. Like I tell these guys sitting here all of the time, you can put it in all on the field, but when these colleges come in and ask for a transcript and you don’t have the grades to get in, then my hands are tied and so are your parents’. I’m telling you guys now, don’t wait until your junior or senior year to decide to become a student-athlete. You have to start now as a freshman.”

Dobbs signed to play at Alabama State University, where he will major in business management. He said that he enjoyed the atmosphere on the campus and the coaches.

“I’ve visited different schools,” he said. “I’ve thought about it and prayed about it, now today I have claimed the one school that I will be going to. It’s taken a lot of pressure off of me because the process was hard. Now, I can relax more and know that I’m going to a good place to continue my dream.”

Dobbs currently has four championship rings to his name from his time at Lanett High School. He’s won three consecutive championships on the boys basketball team and also claimed a football title his junior season. The basketball championship ring from last season is his favorite piece of jewelry that’s he acquired during his time in high school, he said.

Davidson spent this season with Lanett after transferring from Valley last spring. This fall, he will have the luxury of returning to Ram Stadium when he suits up for the Point Skyhawks on Saturdays. On Wednesday, the soft-spoken athlete conducted three consecutive interviews with the media, which was attention he didn’t mind at all.

“I like it,” Davidson said before cracking a smile. “It’s been fun, though. It just  shows that all of this hard work has been paying off.”

Getting the opportunity to share the moment of signing with family members Lavontae McCullough, Key’Air Davidson, Emmett Davidson, Ashanti Davidson, Kaleb Davidson and Ja’Miisha Jones Preston in attendance was the highlight of his high school career, he said. Davidson is currently undecided on his major.