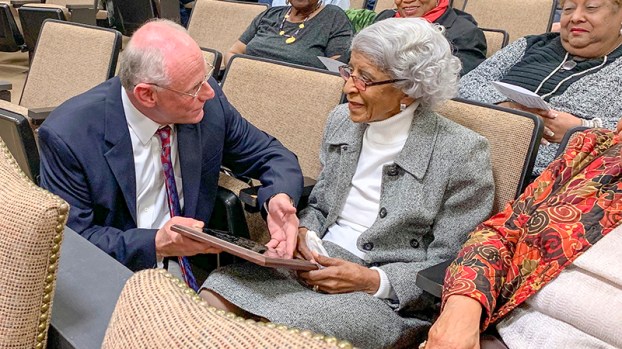 LANETT — It was a heartwarming moment for three Lanett residents Monday night during the Lanett City Council meeting.

Three educators with the Lanett City Schools system were honored as members of society that had a major impact on the city of Lanett and the community, according to Lanett Mayor Kyle McCoy.

Before handing out personalized awards to each honoree, McCoy said education is the key to anything in life.

“Once you learn, it’s something nobody can ever take away from you,” he said. “That is what these three people have instilled in so many young people today.”

McCoy said the education students received from these three individuals allowed them to grow into functioning adults.

“We talk about injustices during this month, and we talk about the different type of things that happen, but the one thing nobody can ever take away from you is what you know and what you have learned,” he said.

McCoy said Hardy was his former student and the impact she had on students throughout the many years is invaluable.  Hardy said it was a great honor Monday night.

“It’s just something good to think about,” she said. “I have taught a lot of people throughout the years, and it is just good to be here. I thank God for all of you and all of Lanett.”

The gym at W.F. Burns Middle School is named after Dunn.

Dunn said he’s glad to be honored and that it was good to see all of his hard work throughout the years paying off.

“I guess it’s paying off right now,” he said. “I feel a lot better now that a lot of the work I did was not in vain.”

McCoy said Harris-Brooks has always had the students’ best interest at heart as president of the school board.

“That type of leadership that she has bestowed upon the board has been able to let Lanett City Schools be strong and still prosper today,” McCoy said. “There are all kinds of things going on in our community, but we are in good hands.”

Harris-Brooks said it has been a pleasure to be the first black president of Lanett City Schools.

“We have tough decisions to make, but we have tough kids,” she said. “It is our job to help these kids to try to succeed and plan education curriculum to help them to live, learn and lead when they leave Lanett City Schools.”