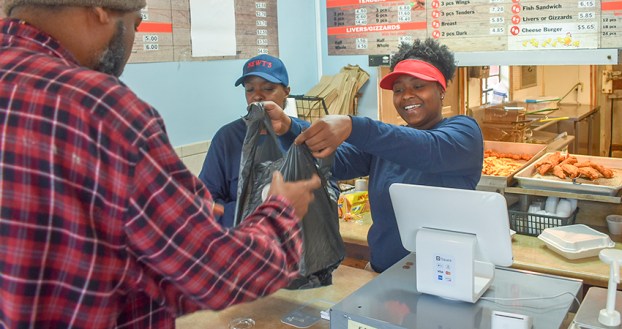 Newt’s is back in business

“It feels really good,” customer McKenneth Cook said while he waited on his order Monday morning. “The last time they opened, the people in West Shawmut really liked it and came out. I’m really glad they opened back up. I hope it’s going to be as successful as last time.”

Newt’s was established in August 1981 and served the community for 38 years before owners James Newton and Linda Newton decided to retire in 2018.

In November, the Newtons began discussions with Da Grub Spot, a local food chain that began with a food truck that’s regularly parked on Highway 29 in Lanett.

“When Mr. Newton presented us with the opportunity, we jumped right on it,” Da Grub Spot co-owner Clarence Heard said.

Da Grub Spot owners and brothers Clarence Heard, Marcus Heard and Jacary Atkinson agreed to purchase the building, but only under one condition.

“All three of us were excited about opening this as Newt’s,” Clarence said.

“It honestly brought some emotions up because this was our childhood spot.”

The three brothers grew up around the corner from Newt’s.

Clarence recalls ordering the chili cheese fries for $2.25 on a daily basis because that’s all he could afford at the time as a student at Valley High School.

“It was always a good feeling,” Clarence said. “Anytime, it didn’t matter where I’ve been in life, I could always come back to eat at Newt’s.”

Despite the change in ownership, the menu and the daily operations of Newt’s remain the same. The Newtons will stay around for the first few weeks of the reopening before letting the current ownership take over, according to Linda Newton.

“We wanted to make sure to keep it in the community and make sure the money stayed in the community,” Clarence said. “You’ll see so many times that a person comes in and takes over in an area, and they’re not even from the area. You’ll see that money get shipped over to wherever they’re from, and that revenue isn’t being generated here. It’s always been important to build the economy where you’re from.”

Clarence said that he learned how important building the economy was through the experience of managing retail stores. In the seven months that Da Grub Spot has been active in the Greater Valley Area, Newt’s marks the company’s third restaurant opening.

“Don’t be afraid to take a chance on yourself, period,” Clarence said. “The one thing that I always tell people is that you’ve got to have faith in yourself. I can tell you all day that water can quench your thirst, but until you go up there and drink that cup of water, it doesn’t do you any good. You’re going to die of thirst.”