Chambers County under a slight risk of severe weather… 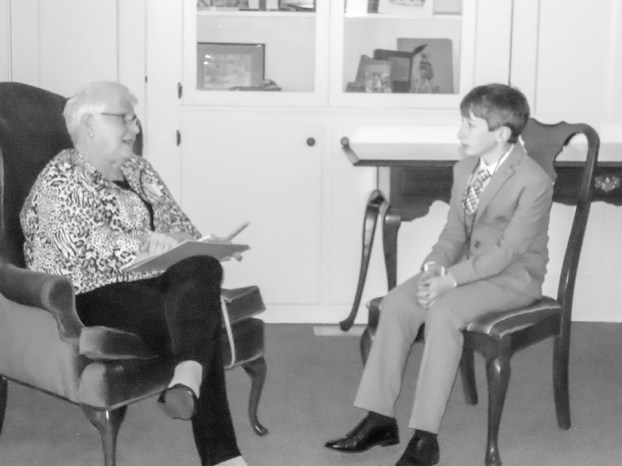 Retired educator and former Chambers County School Board member Judy LaFollette interviewed Parker Williams, a fifth-grade student at Huguley Elementary School, during the first round of “The Amazing Shake” competition at the Cotton Duck in Valley.

LaFAYETTE – Fifth and sixth-grade students in the Chambers County School District are currently involved in an annual competition known as “The Amazing Shake,” designed to help students hone special life skills that will enhance their chances of becoming successful citizens.

Round one of the competition began Tuesday at the Cotton Duck in Valley, where 34 contestants were interviewed by current and former educators and business professionals.

“The object of the first round was for students to demonstrate the importance of making a good first impression,” said Amazing Shake coordinator Lauren Dabbs, a fourth-grade teacher at Fairfax Elementary School. “They were each asked a series of random questions about their likes and dislikes, favorite subjects in school, role models, and future career goals. Judges rated them according to responsiveness, understanding of the questions, eye contact, verbal articulation, and appropriate attire.”

Students received between one and four points in each category, and those scoring the highest number of points will advance to the second round next week.

“All of our contestants did an outstanding job, but only twelve will be moving on in the competition,” Dabbs said. “Our judges always face a tough task deciding who impressed them most.”

On Tuesday, April 23, the semi-finalists will demonstrate their speaking skills and how to remain calm under pressure when the competition continues at Langdale Auditorium,  beginning at 10 a.m. ET. The public is invited to attend.

The third and final round will be held on Tuesday, April 30, at the Chambers County Board of Education office in LaFayette, when finalists will be given “job interviews” by school superintendent Dr. Kelli Hodge and her administrative staff.

The Amazing Shake was created by the Ron Clark Academy in Atlanta, and was first introduced to Chambers County students last year.

“It initially involved only fifth-graders, but we expanded it this year to also include sixth-graders,” Dabbs said. “We will continue adding a grade each year until we get to the eighth grade, at which point we hope to send a student representative to the national finals.”

Students start preparing for the competition at the beginning of the school year by participating in frequent exercises that place emphasis on manners, discipline, respect, and professional conduct.