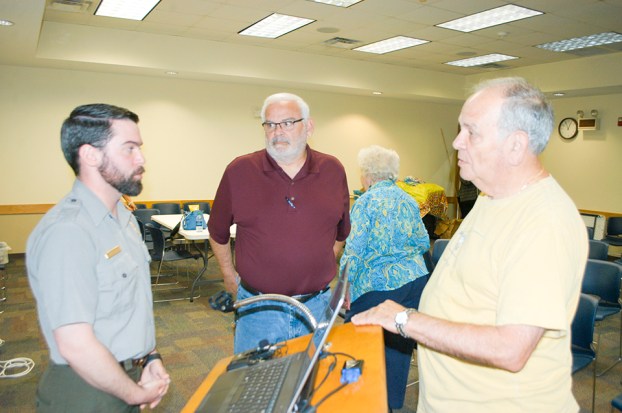 VALLEY — Bradshaw-Chambers County Library is planning a bus trip to Horseshoe Bend National Military Park to take place on Monday, May 13th. During the noon hour on Wednesday, Park Ranger Matthew Robinson was the speaker at a Lunch N Learn program at the library and talked about the sites that will be seen on the bus tour. He also reviewed Horseshoe Bend’s key role in the 1813-14 Creek War in Alabama. The Creeks’ crushing defeat at the Battle of Horseshoe Bend led directly to the Treaty of Fort Jackson, which in turn forced the Creeks to give up more than 22 million of acres of land in what is now Georgia and Alabama.

For many years, the land where Horseshoe Bend National Military Park is located today was farmed. Stories have been passed down over the years of lead balls filling the furrows of plowed fields after rain storms. There’s little doubt those pieces of lead were fired during the battle. In 1959, the land was sold to the U.S. government and five years later Horseshoe Bend became Alabama’s first – and only – national military park.

Robinson has been a park ranger at Horseshoe Bend for the past three years. He recently completed all the requirements needed to earn a Master’s degree in history at Auburn University. He said that he’s enjoyed his time at the park and talking about the historic importance of what happened there in 1814.

The bloody conflict that raged across what’s now Alabama had been brewing for many years. “The Creeks traded deer skins for metal goods,” he said. “At one point, they were trading 200,000 deer skins per year.”

Excessive hunting thinned the deer population and forced Creek men to take longer and longer hunting trips, disrupting their family life. “Sometimes they’d miss out on events like the Green Corn Festival, and they didn’t like that,’ Robinson said. “But they were dependent on metal goods.”

U.S. government officials like President George Washington and Indian Agent Benjamin Hawkins had what was known as a Plan for Civilization. It sought to assimilate the Creeks into U.S. culture by making them farmers instead of hunters. For the first time, they could own their own land. Some Creek men readily adapted to this while others did not.

Along with the deer population dwindling, the Creeks were experiencing a problem of losing land to white settlement. “They knew they were getting a raw deal,” Robinson said.

The Louisiana Purchase in 1803 worsened this trend. This made New Orleans a U.S. city and the federal government wanted good roads to get there. That meant expanding the traditional horse paths to 16-foot-wide roads suitable for heavy wagons, lots of travelers and soldiers.

“The Creeks didn’t like this,” Robinson said. “They thought horse paths were all that was needed. The Creek Nation started to split. One side allied with the U.S. and the other side wanted to go back to their historical ways. This meant taking up the war club.”

Frontier conflict was inevitable. The first blow was struck in the summer of 1813 in what’s now Monroe County, Ala.

In August of that year, approximately 700 Red Stick warriors attacked a frontier stockade known as Fort Mims, killing an estimated 250 people. While most of the victims were of mixed race ancestry, stories spread throughout the U.S. that Indians had killed hundreds of whites. This inflamed the white population with a penchant for revenge.

Militias were mustered in Tennessee and Georgia. The Red Sticks were threatened on all sides. When an army showed up at a village, they would surround it, collapse it and kill anyone who resisted.

The Creeks were losing badly and in desperation formed a refugee town in a bend of the Tallapoosa River. Six nearby villages combined forces to build 300 log houses on a flat plain near the river and to construct a wall across the entire neck of the peninsula that offered protection.

The barricade was six to eight feet in height and ran from one edge of the river to the other. Military historians to this day describe it as a very formidable defense, but with one problem: if an attacking force breached the wall, the land behind you would become a death trap. That’s exactly what happened on March 27, 1814.

“A lot of work went into building that wall,” Robinson said. “(General Andrew) Jackson wrote that it was artfully arranged and that it could not be approached without exposing soldiers to cross fire.”

Jackson had been a military commander since the early 1800s, but this was his first major test. He had maximum advantage over a foe that day and pressed it to full advantage. A well-trained, well-equipped army routed a force not nearly as well equipped or trained.

At the start of the day, an estimated 800 Red Stick warriors taunted their attackers and were spoiling for a fight. By the end of the day, almost all of them were dead and the power of the Creek Nation was broken.

One of his more controversial actions was to send Native Americans via forced marches west of the Mississippi. It was especially cruel for the White Stick Creeks and Cherokees, who played key roles in winning the Battle of Horseshoe Bend.

Robinson said that one of the more interesting items on display in the park’s museum is a rifle intended for a Cherokee warrior who fought with Jackson at Horseshoe Bend. He was later nicknamed ‘Whale’ for the way he swam across the Tallapoosa River that day to get a canoe, paddle it back across the river to take more allies across the river until they had enough men to attack the village and set fire to it. Some historians doubt that Whale ever received the rifle.

Descendants of those who fought and died at Horseshoe Bend live in Oklahoma today and often journey back to the park for special occasions.

“The Creeks, better known as Muscogees, are the fourth largest tribe in the U.S.,” Robinson said. “There’s an estimated 85,000 of them. Some of them were here for out bicentennial in 2014. Some return every year on the anniversary of the battle.”