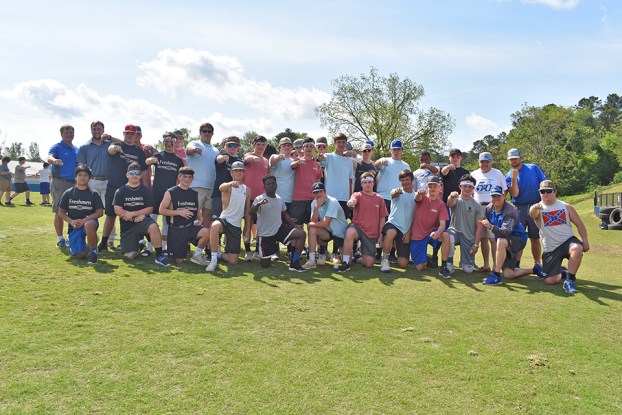 LaFAYETTE — The 2018 Chambers Academy football state championship tour officially came to an end on Thursday morning when the Rebels received their championship rings.

“We’ve been trying for a long time to get one of those around here,” Chambers Academy head football coach Jason Allen said. “For me, it makes me think of all the teams that were so close even out there on that field in 1999. The AISA still played its championships at home, and we lost by one point with 33 seconds to go. We went for two to win and lost 28-27. That team, the team that came up short a couple of years ago down in Troy, it’s all of those kids that talk about getting a ring their whole career and to finally get one is special. It means a lot.”

Last season’s victory ended the three-year streak of the Rebels losing in the state championship, and a combined three points in the latter two seasons.

“[It’s] All of the hard work that my teammates and I have put together throughout the years finally coming together,” Chambers Academy senior lineman Alston Knox, who was also on the three previous Rebels’ teams that lost in the championship game, said. “I know every football player when they first grow up playing pee-wee looks forward to the day that they get a state championship ring and it’s an awesome feeling. A really good feeling.”

The Rebels received the rings in cases on the field at the start of the school’s field day. Activities at the field day included tug-of-war, long-jumping competitions in addition to food.

“Anytime that football is going well, I’ve learned in education, everything else goes pretty well in your school,” Allen said. “Your discipline, your grades are better, your morale. Everything is better. To be able to work hard and be successful in something is teaching these kids something valuable that they’ll look back at one day and understand.”

For seniors like Knox, the championship game was the final football game of their life.

Knox got emotional reflecting on his time as a Rebel, being named the National Association of Private Schools (NAAPS) 2A lineman of the year.

“I wish I could stay and play high school football forever,” Knox said. “That’s the dream, that’s the perfect right there, but everybody has to grow up. You have to graduate and do grown folks stuff. Go to college, pay taxes, that’s the main thing. [I’m] just ready for the next chapter.”