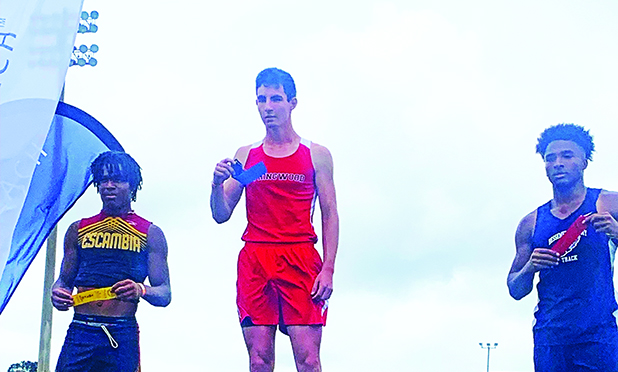 “I think they did really well,” Springwood head track coach Mike Holcomb said. “Especially considering that we were up against some much larger schools that had much larger numbers than we did. Individually, some of them stepped up and gave some of their best performances of the whole year.”

“She’s a tremendous athlete, like all the rest of them,” Holcomb said of Franklin. “Tremendous work ethic wants to get better and be the best that she can be.”

“I really hate losing him,” Holcomb said of the graduating senior. “He’s constantly trying to get a little better. He’s working on his starts, working on his finishes. He is the complete athlete. Considering that we don’t really have a full track, he did super.”

“Chalyb is very interesting,” Holcomb said. “If he wasn’t so good at distance running, I’d actually have him running in there as a sprinter. He has that much speed, as well. He is consistent, he gives it everything he’s got and he works. It’s almost like you can’t work him too much, he wants more. He wants to get better.”

Senior Chris Ramseur placed second in discus, only three inches away from claiming the state title. Ramseur committed to the University Of Mary-Hardin Baylor to play football in the fall earlier this semester.

“He’s been a tremendous asset for us,” Holcomb said. “He had a lot going on, and just stepped up well for us in discus.”

Sophomore Courtney Easlick suffered an injury after falling at the end of the 100-meter dash, being unable to finish the race. Easlick did spend the rest of the day praying for and cheering on her teammates, however, according to Holcomb.

“It was a real challenge for her because she had worked so hard this entire season to get to that moment and then for that to happen,” he said. “For a little bit of time, she got down, but then that drive and everything inside of her, she pulled it together, got back up and was out there supporting the rest of her teammates.”

The Springwood junior high girls finished second in the state. The Wildcats were led by freshmen Hannah Yeager and Jesilyn Mabrey, who won a combined five individual state championships.

“They’re only going to get better,” Holcomb said. “They see these older athletes, and they want to be like them. They want to step up and make their way into the winner’s circle. They’re still young, but most of the track meets that we’ve been to, they have been competing with the juniors and seniors, and they have not been intimidated or anything by the age difference. They just get out and perform.”

The track program hasn’t set dates for the start of summer workouts yet.