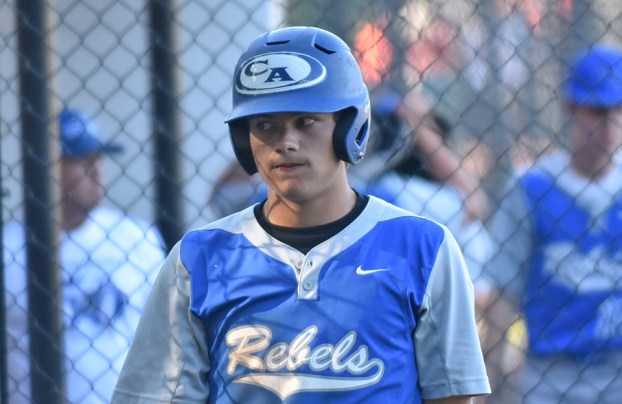 REBELS: Chambers Academy junior Brody Smoot and the Rebels will host the first. round of the playoffs against Evangel Christian on Friday afternoon at 2 p.m. EDT. Photo by Rashad Milligan

Friday is the start of a busy weekend for the baseball teams around the Greater Valley Area. Chambers Academy, Lanett High School, Springwood School and Valley High School all begin postseason play to kick off Easter weekend.

The Rebels (15-9) will host Evangel Christian at 2 p.m. EDT. on Friday. The reigning state runner-up, Chambers Academy has spent most of the season under the radar, not receiving a nomination to be ranked in the Alabama Sports Writers Association (ASWA) prep poll until the final week of the regular season.

“It’s really cliche, but we don’t keep up with it,” Chambers head baseball coach Dillon NesSmith said. “We just play the next game, which is all our goal is to win the next game. If we do that, then we’re on the right track”

Anticipating overnight showers on Friday morning, NesSmith said that he will make his final call at 10:30 a.m. EDT. on whether or not the doubleheader will still start at the originally scheduled time.

NesSmith said that practice has been relaxed this week.

“The kids are tired,” he said. “It’s the dog days of the season just trying to get a lot of reps swinging the bat. [We’re] trying to keep everybody loose and make sure that we don’t have any tired arms heading into the postseason.”

The Panthers (4-11, 2-2) will travel to Tuscaloosa to play Holy Spirit Catholic High School at 1 p.m. EDT. Friday’s matchup marks the first time since 2002 that a Lanett baseball team will play in the state playoffs.

Lanett head baseball coach Hunter Ames said that the team has been focused this week heading into the postseason.

“It’s been good practice,” Ames said. “Guys have been focused and tuned in. They’re excited to make the playoffs, but it’s not just to be in the playoffs. They want to win. They have that mentality. They’re focused, and they’re ready to go.”

Ames also said that he will be in contact with Holy Spirit’s head coach between Thursday night and Friday morning before the team leaves.

Springwood is in a unique position as the lower seed, already defeating Macon East 3-2 on April 4. The Wildcats plan to open this weekend’s series with the same winning pitcher from earlier this month, junior Cameron Hopkin.

“The confidence is everything for those guys because we’ve beat them,” Springwood head baseball coach David Strickland said. “We’ve seen them twice this year. All of the scouting reports that I’ve heard from other coaches match up exactly with what we’ve seen. We’ve seen their No. 1 arms, and they haven’t seen our No. 1 arm. Matchups are pretty good, confidence should be pretty high because we know them very well. We should be able to go in there with high confidence, make our routine plays and we’ll have a chance.”

Strickland said the later time of the first pitch and Macon East’s field conditions should allow everything to go as scheduled.

The Rams (12-9) travel to Troy for a matchup with 5A No. 2 Charles Henderson on Friday evening at 5:30 p.m. EDT. Valley snuck into the state playoffs on the final day of the regular season with a win over Beauregard and a Tallassee loss.

Valley head baseball coach Patrick Shivers said that the feel of the team has been the best that it has all season this week leading up to the postseason.

“The preparation has been great,” Shivers said. “The focus, the energy, the intensity level has been high all week long. We’ve looked great in our defensive work, and we’ve looked good swinging the bat during BP. I expect it to carry over in the games [on Friday].”

The head coach said that he’s not intimidated by Charles Henderson’s ranking.

Shivers also said that he proposed to Charles Henderson’s coach to play the doubleheader on Thursday, but the host coach was content with the original playing date.