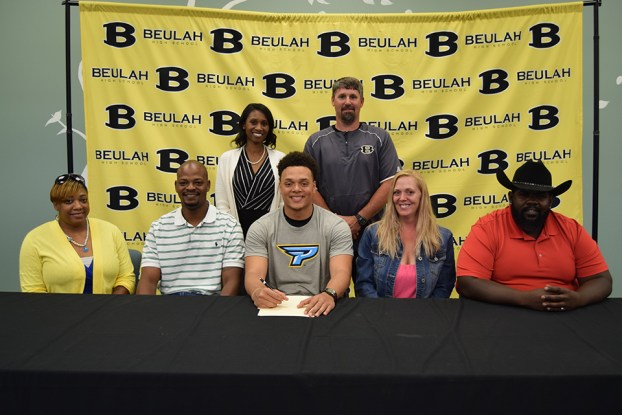 BEULAH — Just days before he walked across the stage as a graduate of Beulah High School, Caden Dowdell has signed with Point University to play football.

“The wait was way too long, and to finally sign somewhere, it felt good,” Dowdell said. “I [no longer] have to worry about where I’m going next, or what’s the next step.”

Dowdell missed some time in the middle of his final high school season, and still finished with 77 tackles, 10 tackles for a loss, four sacks and one fumble recovery in eight games. As a Skyhawk, however, Dowdell will be putting all of his time and attention into one side of the ball as a running back. Last season, the power back rushed for 565 yards and 10 touchdowns.

“It’s going to be a lot easier instead of playing both sides of the ball, it’s going to help a lot,” Dowdell said. “I really fit more as a linebacker, but I like to play offense more.”

Dowdell currently runs a 4.69-second-40-yard dash, and he hopes to bulk up more during his next couple of years in college.

Away from the field, Dowdell looks forward to attending a Christian institution like Point.

“What really drew me in is how they include God in everything,” he said. “I keep my faith in Him. Everything I do, I do through Him. That’s why it was the perfect fit for me.”

After college, Dowdell would like to play at the next level, and after his playing career, he’d like to become a strength and conditioning coach.

At Beulah, Dowdell was a two-time All-State selection in addition to being named to the 2018 All-Valley Area Football Team. Dowdell said that he’s determined to continue to get exposure despite going the NAIA route.

“It’s a different type of feeling,” he said. “It drives me to be the best I can be, the best version of myself.”

Signing his letter of intent was a brief moment of relief for the senior athlete. This year, Dowdell said that he has had to balance his job in Opelika, school, football, making sure his family members were taken care of and position himself to where he could sign to play football collegiately. Now, he has one less task to worry about.

“My heart pounds, I’m getting daydreams about playing college football. I’m already nervous about the first game, and we’re not even around the corner yet. It’s a lot of mixed emotions.”