Four “Davids” were handed out, which is New Horizon’s play on the Academy Award’s Oscar, four additional awards, six scholarships and one special award.

Throughout the past 19 years, New Horizon has given out 59 scholarships totaling more than $34,000, according to Artistic Director Bill Nixon. On Tuesday, Evers Capps, Gracie Lehman, Jessica Connelly, Annah Lee and Sophie McDow each took home a scholarship from the theatre.

Next, it was on to the awards. Chase Golden took home the “David” for outstanding actor, male in a principal role for his performance as Gomez in “The Addams Family.”

As Golden received his statute, he took a minute to soak in the fact he was being honored for something he loves doing. 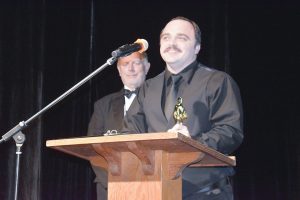 Chase Golden is soaking in the fact he won Outstanding Actor, male in a principal role for his performance as Gomez in “The Addams Family” at New Horizon’s 2019 Award Banquet Tuesday night in West Point. — Dustin Duncan

“This award is for the entire family. I don’t mean The Addams Family, I mean the New Horizon’s family,” he said. “When you step through these doors, you are no longer just a person acting, you are a family member.”

Golden’s counterpart in “The Addams Family” Cassie Ellerbee, who played Morticia, took home the David for outstanding actor, female in a principal role.

“I want to thank my New Horizon family because you all are like family to me and every time I come in it is always a warm welcome,” Ellerbee said. 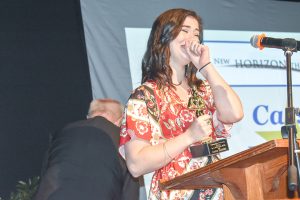 Cassie Ellerbee was awarded as Outstanding Actor, female in a principal role for her performance as Morticia in “The Addams Family” at New Horizon’s 2019 Award Banquet Tuesday night in West Point. — Dustin Duncan

She thanked the season ticket holders to New Horizon who are the ones who vote on the awards through a mailed ballot. The ballots are then returned to the theatre where a committee, made up of New Horizon board members tallies up the results. Nixon said the ballots are counted and confirmed in such a way that no one individual knows the winners in any category.

Continuing the theme that “The Addams Family” had on the awards banquet, Annah Lee took home the best supporting actor role for her performance as Pugsley.

“I was excited when I got cast for this because I’ve never played a boy before,” she said. “I was like ‘this is going to be fun,’ and it was really fun.”

She said it was one of her favorite shows she’s ever been cast.

Additionally, Harrisyn Reames and Camp Miller took home the young actor’s award, which is based on the young actor production produced by the theatre each year.

Gracie Lehman took home the producer’s choice award, which is presented to the backstage person who contributed to the success of the production. Nixon said Lehman was instrumental in making sure the theatre’s production of “The Outsiders” ran smoothly. 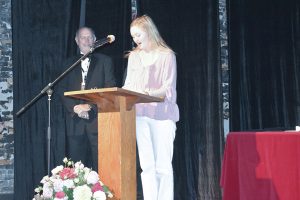 Gracie Lehman was given the Producer’s Choice award for her work behind the scenes during “The Outsiders” at New Horizon’s 2019 Award Banquet Tuesday night in West Point. — Dustin Duncan

Heather Connelly won the chorus award which is awarded to the ensemble cast member, who, in the eyes of their fellow actors, contributed most to the success of the production. Connelly won the award for her role in “The Addams Family.” 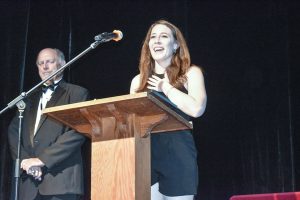 Heather Connelly reacts after being named the Chorus Award winner during the for her performance in “The Addams Family” at the New Horizon’s 2019 Award Banquet Tuesday night in West Point. — Dustin Duncan

The director’s award, which was created to honor someone who made “exceptional contribution to the theatre throughout the past year,” went to the Capps Family, Nixon said.

He said the award is not voted on by the season ticket holders but by himself.

Just when Nixon thought the awards were all handed out, Amy McDow, New Horizon’s marketing manager, came out to award Nixon with the Legacy award.

“This theatre is far more than just a theatre — it’s a community,” McDow said. “It is so much more than four or five performances a year — it’s over 30 years of history with memories that reach far beyond the stage.”

She said the theatre was named for Suzie Lanier Maxwell, who helped shape the path of the theatre as a board member, patron, support and volunteer.

McDow said she left the theatre with a vision and a legacy of hope and Nixon’s sacrifice and dedication has allowed the theatre to continue to live.

“To receive an award in Suzie’s honor is special,” Nixon said. “Suzie was a special lady, and this place is a special family.” 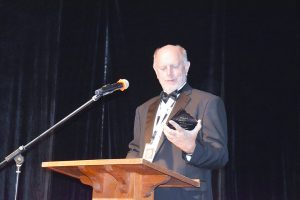 New Horizon Theatre Artistic Director Bill Nixon was surprised Tuesday with a Legacy Award by his peers for everything he has done for the theatre throughout the past 35 years at New Horizon’s 2019 Award Banquet in West Point. — Dustin Duncan

At the end of the banquet, Nixon announced next year’s lineup. The upcoming shows include “You’re A Good Man, Charlie Brown,” in October, “Closed For the Holidays,” in December, which is a holiday comedy, Agatha Christie’s “The Hollow” in February and the musical “Beehive,” in April. 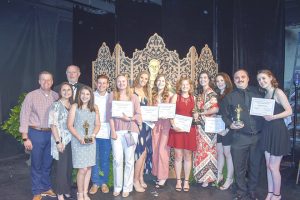 All of award and scholarship winners gathered for a photo after the New Horizon Theatre’s 2019 Award Banquet Tuesday night in West Point. — Dustin Duncan