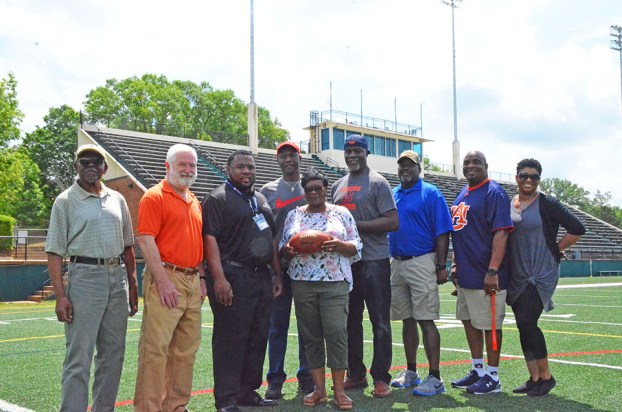 COMMUNITY STAPLE: The West Georgia Superstar Football Camp has been a fixture in LaGrange for 25 years now. Photo by Kevin Eckleberry

Georgia Superstar Football Camp has been a fixture in LaGrange.

The camp, which was created by LaGrange native and former NFL player Ruben Hairston, will return for its 26th year on June 1, with a star-studded cast of instructors set to share their knowledge.

There will also be a youth cheerleading camp going on at the same time.

“There aren’t too many things you can get that are free,” said Hairston, who played in the NFL with the Kansas City Chiefs. “We’re just hoping everybody can come out and be a part of it.”

For most of its history, one of the driving forces behind the camp was Anthony “Boss” Freeman, a LaGrange High graduate who was a manager for the Auburn football team beginning in 1984.

Freeman formed some life-long friendships during his time at Auburn, and he used those connections to help bring some expert instructors to the West Georgia Superstar Football Camp.

Each year, it’s like a Who’s Who of Auburn football from the 1980s, with Aundray Bruce, Smokey Hodge, Brent Fullwood and others.

“I love that guy, ever since 1984,” said Bruce, who was a first-round pick of the Atlanta Falcons in 1988 after completing his time at Auburn. “We’re going to be doing stuff on his behalf. Hopefully we can coordinate and get together and go to his resting place.”

Hairston said a key reason he has continued to offer the camp year after year is his desire to help the young people of Troup County.

“Like I tell everybody, you can pay now or pay later,” Hairston said. “You show time and love for the kids now, it makes a difference. If we can save one or two, we can make a difference in the community.”

REGISTRATION: At Callaway Stadium the day of the camp