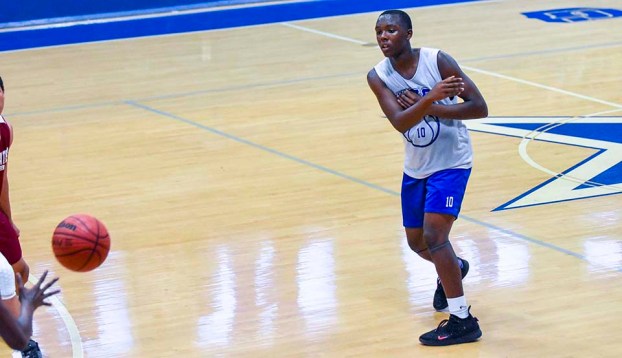 In the first game of the day, Valley lost 46-35 against Whitewater High School. A couple of minutes before the end of the first half, the Rams were down by a score of 25-9 before bringing on full-court pressure and cutting the 16-point deficit in half, only trailing 26-18 at the break.

Valley continued its momentum in the second half, trailing by a couple of possessions with 11:20 remaining in the game, but Whitewater continued to counter every Rams’ score coming down the stretch.

“I think that we got on the court with no intensity,” Valley boys head basketball coach Marshon Harper said. “Then we tried to pick it up when we got behind. I told them that we have to come out in the beginning with intensity. The way we start the game, the way we finish the game. We have to the same. There was just a lack of intensity today.”

In Tuesday’s opener, Valley took a marginal amount of three-pointers, seemingly more attempts than the usual amount the team has attempted for most of the other exhibitions this summer.

“Today, I think we struggled a bit shooting the ball outside,” Harper said. “When something’s not working, we have to find another element to our game, we have to post up, we have to cut, pick-and-roll a little bit more. When your jump shot isn’t falling, you have to find something else to do.”

The Wildcats used their size advantage over the Rams in the matchup, with strong takes the basket and multiple second-chance opportunities on offense.

“They [Whitewater] had a big guy inside,” Harper said. “He ate up the offensive and defensive rebounds, we couldn’t get many. We only had two or three chances to post up, and he was posting us up all day. [We have to] communicate on defense. We usually have the backside to catch the lob, but we’re going to get better. It’s just a learning curve.”

Next on the schedule for Valley is the Rams’ own play date on Thursday. The day will also feature Smiths Station High School, Lanett High School and LaFayette High School.

“Come out and support the guys,” Harper said, “they’ve been working very hard.”