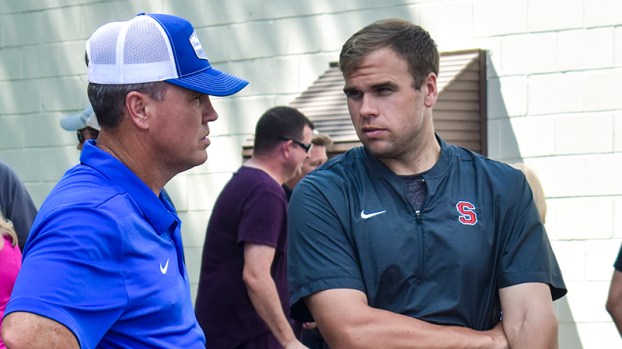 Police chiefs, mayors and residents grabbed a few slices of pizza, a hamburger and a cold drink and got excited about the impending football season scheduled to kickoff Aug. 23.

“We wanted to be able to bring in all the coaches and get everybody hyped about the upcoming football season,” she said. “We are excited to get them here, meet them all, and have the community come out and wish them luck.”

Jason Allen, Chambers Academy head football coach, said the beginning of football season is the best time of the year.

“The Valley area has always been football crazy,” he said.

Allen said it’s great to be part of a community where people care about the game and the impact shows.

“I think it takes our program to another level because the kids see the excitement from the fans, and it makes them work that much harder,” he said.

“They get really geared up in the fall when football comes around,” he said. “The kids see it, and they can sense the energy and that the community is excited about football, and that takes their excitement to another level.”

Strickland said the coaches enjoy events like the tailgate because they get to show their faces in public outside of the sidelines.

Clifford Story, head football coach at Lanett, said it’s incredible to have people who understand what a coach goes through each year.

“It lets us know that we are appreciated and a lot of people may not say things but their actions speak louder than words,” he said. “They are showing us today that they really appreciate what we do for these communities and the children that we coach and teach on a daily basis.”

Buster Daniel, head football coach at Valley, said the tailgate isn’t just important for the coaches but for everyone on the football team and school.

“This is a big deal, and it shows you have support for your football team and your schools,” he said. “These are local people who really get on board for this kind of stuff.”