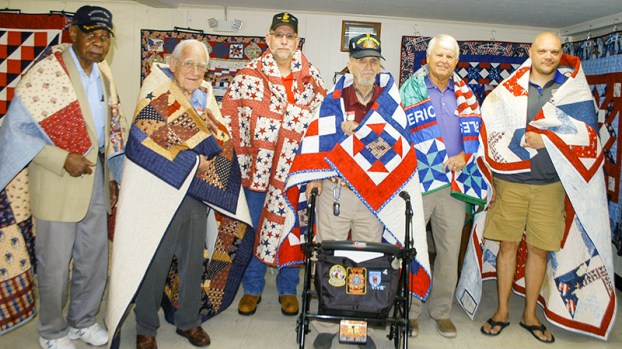 It was the latest ceremony on the part of the Georgia-Alabama State Line chapter of the Quilts of Valor.

Quilts of Valor is a national foundation of people who make quilts to cover service members and veterans who have been touched by war in order to provide comfort, honor and gratitude for their sacrifices and service.

The six veterans recognized on Saturday served in the U.S. Army, Navy or Air Force. They include Edwin “Butch” Garrison of West Point, Mack E. Lett of Lanett, Ed Davis of Valley, Ron Douglass of Opelika, Robert Hill of LaGrange and Terry Rumph of Manchester, Georgia.

A World War II veteran, Davis served in the U.S. Navy. He had a broad smile on his face when the quilt was unfurled for him to see for the first time. He had something special in mind for it.

That put a big smile on Mrs. Davis’ face, and some appreciative applause from a sizable crowd gathered inside sewingmachine.com.

“This is a beautiful quilt, and I appreciate it very much,” said Douglass, a veteran of the Iraq War.

Douglass said he was proud of his service and enjoyed going to reunions of those he’d served with. He said he’d recently attended one at Fort Benning. Douglass is an active member of American Legion Post 67 in Valley.

Hill retired from the U.S. Army this past Thursday. He’d been in the Army since 1996 and had served in Bosnia and Afghanistan and reached the rank of staff sergeant.

His quilt had “America, the Land I Love” emblazoned on it.

He smiled when the quilters unfurled it for him.

A retired Chambers County educator, Lett is a U.S. Army veteran and served in Korea in the early 1950s.

He said he’d never forget coming back to the U.S. after being overseas and in harm’s way for an extended period.

He said that San Francisco was a really nice place to be after having been in the Korean War.

Rumph lives near Shiloh, Georgia, in northwest Talbot County. He was in the U.S. Army from May 1967 to July 1975 with three tours of duty in Vietnam.

“In 1968 and 1969, I was with headquarters and the main support company of the 63rd Maintenance Battalion,” he said. “We were in Quang Tri province. In 1969 and 1970, I was an agriculture and refugee advisor with the 29th Civil Affairs Company, and in 1971 and 1972, I was with the Headquarters Company of the 525th Military Intelligence Group at the MACV Annex at the Tan Son Nhut Air Base near Saigon.”

Rumph, who gets about these days with the air of a walker, thanked the quilting group for recognizing his service and that of other veterans.

“Each one being honored today was recommended to us by someone,” said Quilts of Valor member Sheila Simpson. “Thus far, a total of 225,014 veterans and active duty personnel have been presented a quilt by our organization. That’s a lot, but there are so many more who deserve this recognition.”

Quilts of Valor was founded in 2003 by Catherine Roberts, whose son was serving in Iraq at the time.

Always feeling close to panic over her son being in a war zone, Roberts in 2003 had a dream one night that her son was sitting on the side of his bed struggling with his war demons.

She visualized him being wrapped in a quilt and having his whole demeanor changed to one of hope and well-being. The dream inspired her to start a local quilting group to make quilts for active duty personnel and veterans.  Their first quilt was presented to a wounded soldier recovering from his injuries at Walter Reed Hospital in Washington, D.C.

It took that small group three years to make 100 quilts.

Word spread about what they were doing, and other quilting groups were organized.

Today, there are Quilts of Valor chapters all over the U.S.

“These quilts have a three-part message,” Simpson said. “First, we are honoring these men today for their service, for their willingness to have left all they held dear and to stand in harm’s way in a time of crisis. Second, we know that freedom is never free. Our quilts are meant to say thank you for your many sacrifices. For those of us who have never been in a war zone, such experiences are beyond our capacity.

“Finally, these quilts offer you comfort. This quilt is not meant to be hung on a wall or put in a display case. We want each of you to use it. Should you ever experience dark memories or need the warmth of a hug, it is our hope that you will let this quilt wrap itself around you and give you both.”

Another veteran, Clarence Holliday, had planned to be at Saturday’s program but was in the hospital this past week. He sent word during the program that he had been released and was doing better.

The quilting group meets on the first Saturday of the month at sewingmachine.com. Anyone with quilting skill who would like to join is welcome to come by. The current group includes Simpson, coordinator Rachel Ramirez, Heather Bostick, Angela Maddux, Shirley Welch, Hetty Mapp, Cecelia Lashley, Johnnie Dozier, Lisa Parham, Teresa Bookwalter, Sherri and Ellery Reichardt, Linda Jones and Joanna Pearson.