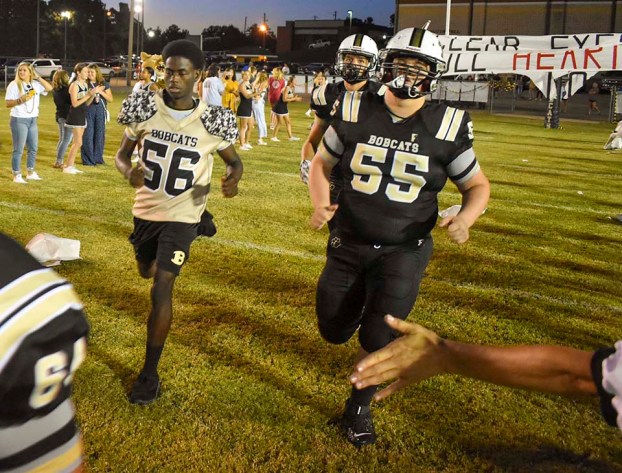 BEULAH — The Beulah Bobcats (3-2, 1-2) were unable to complete a remarkable fourth-quarter comeback against Southside High School in a 36-34 loss on Friday night.

Beulah trailed by 16 points with 5:51 to go in the fourth quarter. The Bobcat bunch was somber on the field as head football coach Matt Johnson gave the team his parting words.

“I feel extremely sorry for the seniors,” Johnson said. “They’ve worked their tails off, and we just came up a little short tonight. They fought, we had a lot of adversity, so many players are injured right now and so many [layers stepped up. I’m proud of this team and how they fought, especially to come back that last quarter.”

After a pair of tackles for a loss to begin the game for the Bobcat defense, Southside completed an 85-yard touchdown pass along the Beulah sideline to take an 8-0 lead.

A couple of drives later, Beulah entered the red zone thanks to a first-down reception from senior JaQuavion Johnson. The catch was followed by senior running back Chris Person dragging a pair of Southside defenders with him for a first down and junior quarterback Kaleb Abney running into the end zone that got the Bobcats on the board. A completed pass to Johnson tied the game at 8, which was the score through the end of the first quarter.

Beulah senior athlete Andruw Coxwell scored on the first play of the second quarter on a short run to give the home team a 14-8 lead.

Selma completed a 31-yard touchdown reception with 46 seconds to go in the first half.

The Panthers then converted the two-point conversion to take a 16-14 lead.

Beulah junior Makell Patrick had a big kickoff return to get the Bobcats in the red zone to begin the ensuing drive.

Johnson made a first down catch with 12 seconds left, and after a few failed attempts to score a touchdown, the Bobcats brought the field goal unit on the field.

The field goal was wide right as time expired and Beulah trailed by two at the half.

Beulah and Southside each scored a touchdown early in the second half to keep the score a two-point difference.

Johnson got a big reception on third and long for the Bobcats on the ensuing drive, but he fumbled the ball as he fought for a first down. Once Southside recovered with 6:08 remaining, the stadium lights on Beulah’s side of the field went out.

After a 15-minute delay, Southside ran for a 50-yard touchdown to take a 16-point lead.

Beulah sophomore Sondreikus Cooper then returned the ensuing kickoff into Panther territory. A couple of plays into the drive, the Bobcats completed a quick touchdown pass to Cooper with 5:01 remaining.

Selma recovered the Bobcats’ onside attempt, but went on to fumble the ball, giving it back to Beulah with 4:30 to go in the ball game.

Coxwell made a touchdown reception with 3:48 to go in the fourth quarter and Person rushed in the end zone on the two-point conversion to cut the deficit to two again with 3:41 remaining.

“That’s just a credit to these kids,” Johnson said. “These kids are working hard, it means a lot to these seniors and this whole team. I’m blessed to be here, blessed to be a part of it, we’re going to get better. We have to get healthy.”

Southside ran the clock down, but a Bobcat defensive lineman hopped offside on fourth and 5 that gave the Panthers a first down that allowed them to run out the rest of the game clock. Johnson said he didn’t want the lineman to get down on himself about the penalty because it was several plays throughout the night that resulted in the loss.

“I told them that the only option that I’m going to accept is to come back on Monday and get better because we still have the season ahead of us,” Johnson said.

Beulah now heads into an open week for rest.