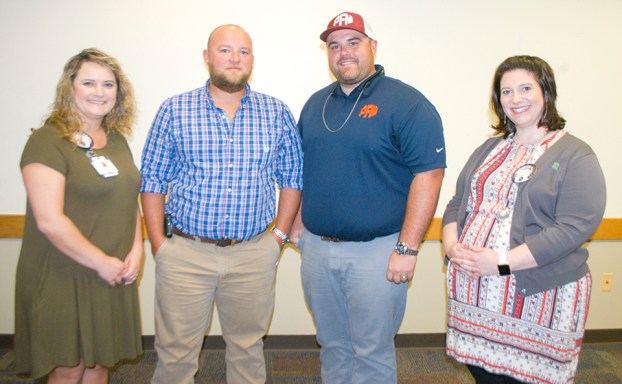 VALLEY — At Wednesday’s meeting of the Valley Kiwanis Club, two men who grew up in Beulah and are now running a business talked about the opportunities out there today in the field of welding.

Dustin Hill is the owner and Ryan Smith the outside sales manager for PFM, Inc., which stands for Piping, Fabrication and Maintenance. They specialize in mechanical, underground and sanitary piping, plumbing, metal fabrication, plant maintenance and demolition. They have a shop in the former Ampex building in Opelika and have 40 to 45 employees throughout the Chattahoochee Valley.

“Our welders are certified in all areas,” Smith said. “We’ve done contract work for companies such as Kia, Norbord, Knauf and West Rock. We do lots of work in the Opelika-Auburn area and Columbus. We’ve also done work in the Midwest and the Plains states. We’ve found that many companies are having a hard time finding skilled tradesmen to do work for them. There is a demand all over for this kind of work. It’s a need we help people with. We will go where we need to when there’s work to be done.”

“If you see cooling towers behind hospitals or schools that’s the kind of work we do,” Hill said. “We’ve put up metal shopping centers for people. We can do contract work for companies like John Soules Foods and businesses that may want to locate on the Lanett Mill site.”

Smith said he and Hill take pride in the fact they know all their employees and their families.

“It’s not that way with companies that have 200 or more employees,” Smith said. “We have 42 people working for us right now. We know them personally and their families, too.”

PFM has done work for Auburn University and has also taken on jobs at other colleges such as Georgia Tech and Middle Tennessee State.

“We’ve been doing this six years,” Hill said. “We are still trying to get our name out there. Word of mouth is the best method we’ve found. Face-to-face contact is the best way to get it done.”

“All our employees live between the Valley, Opelika-Auburn and Columbus,” Smith said.

“We start people out as helpers,” Hill added. “I was 18 when I started and have worked up from there. I learned welding and boiler making. We have beat the street making contacts.”

Southern Union State Community College has been a valuable resource for them.

“They have a welding program, and we work with them,” Hill said. “With us, young people coming along in welding can learn different kinds of welding other than pipe and structural welding.”

Someone starting out as a trained welder can make $10 an hour at 18 years of age. Their wage level goes up with experience and greater levels of skill.

“Some welders make over $30 an hour,” Smith said. “Those with a specialty such as tube welding can make $50 an hour. They are in great demand. Welding is not an easy profession, but it can pay well for those who are dedicated and committed to getting jobs done.”

“Most of our employees work at least 40 hours a week,” Hill said. “A total of 38 of them are on contract. Most of them go to a work site, work their schedule and go home.”

Hill added that the Valley is a good location for his kind of business.

“There are work opportunities out there with the big companies we have and more on the way with John Soules Foods,” he said.