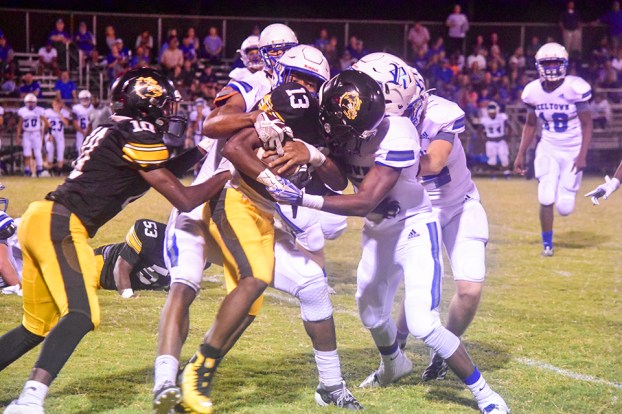 dustin Duncan | Times-News trying to get away : LaFayette running back Joshua Combs tries to break away from Reeltown defenders during Friday’s game.

LaFAYETTE — The stage was set for Jordan Walker and the LaFayette Bulldogs to score late and potentially win against the Reeltown Rebels Friday night, but it wouldn’t come to fruition.

LaFayette’s senior quarterback Walker was intercepted by Reeltown junior defensive back Johnny Brown as LaFayette (2-2) was trailing 21-14 with a little more than two minutes to play in the game.

The interception occurred just after LaFayette made an impassioned fourth-down stop after a 10-play, 5-minute drive that zapped much of the fourth-quarter clock.

However, the biggest blow of the game came when LaFayette senior running back Xavier Holloway fumbled after catching a screen pass from Walker. Reeltown senior linebacker Jay’Quavious Corbitt scooped up the football and ran it in 30 yards giving the Rebels a two-touchdown lead.

The Bulldogs answered two drives later with a 28-yard touchdown pass from Walker to junior wide receiver Ja’Mariae Daniel, bringing the score to 21-14.

LaFayette head coach James Lucas knew after the final whistle that his team let one get away.

“We turned the ball over too many times,” he said. “That play we gave up a fumble recovery for a touchdown was the difference.”

Lucas said he never doubted his team’s heart, and he knows the team will have a short memory and be ready next Friday.

Reeltown head coach Matt Johnson said the Rebels were able to win the game by playing their brand of football.

“It was an unbelievable job by the defense,” he said. “That’s Reeltown football. Grind it out, manage the clock well and play good defense.”

Walker finished the night completing three passes for 36 yards on 10 attempts with one touchdown and two interceptions.

LaFayette senior running back Keandrae Peterson was busy Friday night with 14 rushes for 75 yards, including a 63-yard touchdown run to put the Bulldogs on the scoreboard early in the second quarter.

On the defensive side of the ball, junior defensive lineman Antavious Woody led the defense with 12 tackles and forced fumble. Fellow junior lineman Ryan Finley also chipped in 12 tackles.

Lucas said his defense always plays well but the offense Friday night seemed to get off-track.

“We kept trying to hit the home run balls instead of taking the underneath stuff,” he said. “We’ll see them (Reeltown) again in the playoffs, and we’ll have a better picture of them then.”

The loss was LaFayette’s first region defeat of the season, bringing their 2A Region 4 record to 2-1.

The Bulldogs will stay at home next Friday to host Notasulga, which lost to Lanett Friday night 28-13.

Reeltown remains undefeated on the season and will travel to play Maplesville next Friday night.