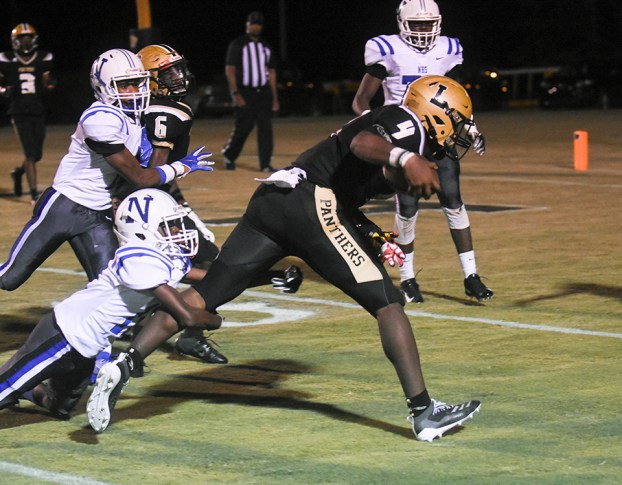 daniel Evans | Times-News not being denied: Lanett quarterback Kristian Story breaks a tackle during a 12-yard touchdown run in the first quarter of Friday night’s 28-13 victory over Notasulga. Story broke this tackle and dove into the end zone.

LANETT — Lanett quarterback Kristian Story ran for three touchdowns and threw for another as the Panthers overcame four fumbles to defeat Notasulga 28-13 on Friday night.

Story scored on touchdown runs of 62, 12, and 8 yards — diving into the end zone on the shorter runs — as the Panthers (5-0) escaped with their undefeated record intact. Lanett trailed 10-7 at halftime and caught a break when the Blue Devils’ Justin Tirado Huerta pulled a 17-yard field goal with 9:27 left to play in the fourth quarter that would’ve given Notasulga the lead.

Huerto had already hit from 35 and 42 yards on the night.

Lanett’s offense woke up in the fourth quarter as Story ran around right end for a 62-yard touchdown run that gave the Panthers a 21-13 lead with 7:22 left to play. After a defensive stop, Story threw a 55-yard touchdown to Travaunta Abner, who broke several tackles on his way to the end zone.

Lanett led 28-13 at that point with 4:30 left, and the Panthers’ faithful could finally exhale.

“We fought through a lot of adversity,” said Lanett coach Clifford Story. “We were really, really flat. [Notasulga] Coach [Anthony] Jones did a heck of a job. He had his team prepared to play. Sometimes you are going to have these types of games and to come out on the winning side, I take my hat off to the halftime adjustments and my team. I’m proud of them, but there’s a lot of things we have to clean up and fix.”

Lanett’s start on offense summed up the night. On the third play from scrimmage, Story hit Abner for a 20-yard completion, but Notasulga forced the ball out and the Blue Devils recovered.

Despite the turnover, neither team scored in the first quarter, and Notasulga actually had negative yards of total offense after several negative plays on its first drive.

A blocked punt by Lanett gave the Panthers the ball at the Notasulga 12-yard line. On the first play after the block, Story rolled right, saw no one open and ran for a 12-yard score around the right end to give Lanett the lead.

After Notasgula went three-and-out on its next possession, Lanett gave the ball right back to the Panthers on a fumbled punt return. The Blue Devils’ Daryl Brown ran the ball down the 5-yard line, but Notasulga only went backward from there, as a mix of false start and holding penalties pushed the ball back to the Lanett 18.

Huerta nailed a 35-yard field goal to put the Blue Devils on the board with 4:54 left in the second quarter.

The Blue Devils kept the momentum by recovering a surprise onside kick and Brown led them right down the field. Brown scored on a 15-yard rush right up the middle, breaking several tackles and carrying Lanett defenders into the end zone, as the Blue Devils took a 10-7 lead.

Lanett went right down the field, but Story fumbled at the Notasulga 22 with less than a minute to play, and the Blue Devils recovered.

Lanett didn’t take the lead for good until the 5:27 mark of the third quarter. Story scored on an 8-yard touchdown on third-and-goal, giving the Panthers a 14-10 advantage.

Huerta kicked a 42-yard field goal on Notasgula’s next possession, and then Lanett fumbled the first play of the ensuing possession on a mishandled handoff.

Notasulga drove to the Lanett 2 yard line and faced fourth-and-goal. The Blue Devils elected for a field goal, but Huerta missed, and the Panthers took control.

“Our defense stood strong and that guy finally missed a field goal,” Story said. “He had made some long ones all night, but he missed one that needed to be missed, and we drove down and scored. I take my hat off to my team.”

Five plays later, Story ran around right end for his third rushing touchdown as Lanett seized control. Another defensive stop led to Story’s pass to Abner, which gave the Panthers their biggest lead of the night.

“He was able to make a big run and big throw right there to put the game away, so I’m proud of him,” Story said of his son Kristian.

Lanett plays out of region next week at Handley next Friday.