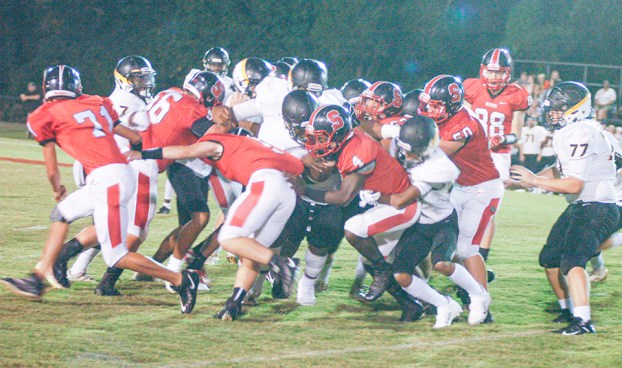 PHOTO BY Wayne clark | Times-News TOUGH NIGHT: Springwood was hard pressed to compete with the No. 1 rated Autauga Generals Friday night. The visitors raced out to a big halftime lead on their way to a 69-15 win. Now 2-3 on the season, Springwood hosts cross county rival Chambers Academy next Friday. Running back O.J. Tolbert was bottled up for most of the night but did manage two touchdown runs in the second half for Springwood. He had third quarter runs of 80 and 75 yards to put the Wildcats on the scoreboard.

LANETT — Springwood faced a mighty uphill climb in taking on AISA’s No. 1 rated team, Autauga Academy on Friday night. The visitors were every bit as good as advertised and powered their way to a 69-15 win over a clearly overmatched Wildcat team.

Star junior running back O.J. Tolbert, who had been held to 22 yards on five carries in the first half, exploded for two big runs in a time-shortened second half. Both runs were down the home sideline at Wildcat Stadium, one going for 80 yards and the other for 75 yards.

Autauga started the second half like they did the first half. After Tolbert’s first TD run, they ran the kickoff back for a touchdown. They added two more touchdowns to make the final 69-15.

The good news for Springwood is that they won’t have to play another team as good as Autauga for the rest of the year. The bad news is that most of the teams left are pretty good. The next one up is the defending state champion Chambers Academy Rebels.