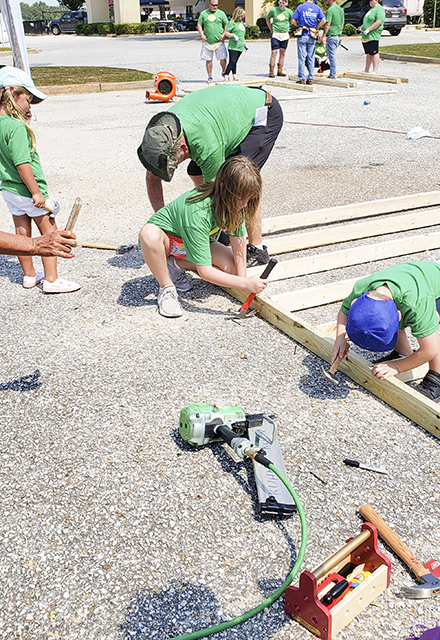 Volunteers of all ages lend a hand to a prepare for the Chattahoochee Fuller Center’s Project Legacy build in Beauregard. -- Submitted

LANETT — The concrete slabs have been poured, 11 sets of walls and trusses are on site, and work is ready to begin on the Fuller Center for Housing’s 2019 Legacy Build.

It starts with a kickoff dinner at Providence Baptist Church in Beauregard at 6 p.m. CDT on Sunday, Sept. 29. Eleven new homes will start to go up the next morning.

There will be a strong contingent from the Greater Valley Area. West Point Mayor Steve Tramell will be one of the house captains. The local office for West (formerly InterCall) and J. Smith Lanier & Company will send teams of employees to the build.

“They will be grouped on the same house,” Roberts said. “We are expecting temperatures each day to be in the nineties. We’ll have some hot weather, but we’ll be prepared for it. We will have lots of Powerade, Gatorade, water and Cokes on site.”

Knauf has donated the insulation and Norbord the OSB that will be used in the home construction.

“We are so glad to have them on board with us,” Roberts said.

Some significant corporate donations have been made recently to help defer costs.

The Hallmark Channel will be involved in the construction of three of the new homes.

They will be doing a documentary on the building of these homes and how residents of Beauregard are getting back to a sense of normalcy after devastating tornadoes swept through their community on March 3, killing 23 people, injuring dozens more and leaving many people homeless.

“I’ve talked to people from the Hallmark Channel on the phone a good bit,” Roberts said. “They are such nice people. I can’t wait to see the documentary.”

“We have been in Lee County a lot the past few months,” Roberts said. “We miss the Valley so much, but the people we are around are so welcoming. They have made our work so meaningful.”

The new homes to be built will be in the heart of ground zero, where most of the damage took place and people died on March 3. They will be going up on Lee Roads 36, 38, 39 and State Route 51.

Team Rubicon will have a presence ion Beauregard during Legacy Build week. Founded by Marine veterans William McNulty and Jake Wood, Team Rubicon is headquartered in Los Angeles. It’s a veterans service organization that uses disaster response as a means of helping reintegrate veterans back into civilian life.

Formed in 2010 as a means of helping the people of Haiti recover from a devastating earthquake, Team Rubicon has helped flooding victims in Pakistan, tsunami victims in Chile, and those in need of help in such locations as Burma, Sudan, Ecuador, Nepal, Greece and Turkey.

Domestically, they have helped those in need following tornadoes in Oklahoma and storms such as Hurricanes Matthew, Irene, Isaac and Sandy.

“They have such a beautiful tool trailer. I love it,” Roberts said of the Team Rubicon guys.

“We have been on a wild ride,” Roberts said. “Robin and I know nothing about building a house, but we work every day with those who know everything about house building. There is so much that has to be done in building a house. We deal with guys who specialize in putting in water lines, septic tanks, roofing, insulation, you name it. What’s important is that it all comes together, and it always has.”

For Roberts, there’s a little bit of dread and a lot of excitement heading into Legacy Build week. “

It will be an amazing, emotional and tiresome week, but God is with us. He supplies our needs.”

Each of the 11 new homes will host a dedication ceremony at 4:30 p.m. CDT on Friday, October 4. By then, 17 new homes will have been built and have families living in them. The home to be built in mid to late October in Smiths Station will bring the 2019 total to 18 houses.

Word is getting out about the CFCP and what it can do. They’ve recently been approached to build a new home for a family in need in Jasper, Alabama.