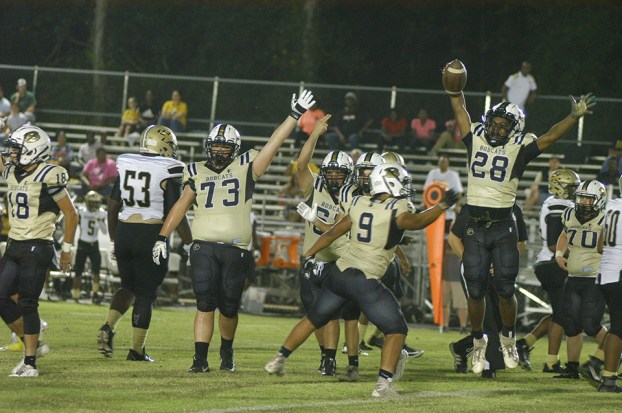 Wayne Clark | Times-News BIG PLAY ON DEFENSE : Beulah’s Quay Moreland (28) holds the ball high after recovering a fumble early in the game with Bullock County. It set up a touchdown and helped the Bobcats jump out to an 18-7 lead. The game would go Bullock County’s way in the second half as the Hornets would take a 48-18 win.

BEULAH — It was a great start and a bad ending for the Beulah Bobcats Friday night at Bobcat Stadium.

Beulah took advantage of some early Bullock County mistakes to have an 18-7 lead over the visiting Hornets. That great start turned into a nightmare with the Hornets scoring 41 unanswered points to win 48-18. With the loss, the Bobcats fell to 3-3 overall and 1-3 in 3A Region 3. Bullock County improved to 3-3 on the year.

In the early going it looked as if the Hornets were going to hand the game to Beulah on a silver platter. They fumbled the ball away on their first two plays from scrimmage. Beulah recovered both of them and scored touchdowns to grab the early 12-0 lead. Rain Latham recovered the first one to set the offense up in great shape at the Hornet 45, With quarterback Dylan Coleman leading the way, the Bobcats took it in for the game’s first score. Coleman had some key runs in the drive and passed 15 yards to Billy Wayne Sykes for the touchdown.

The point-after failed, but with 8:18 left in the first quarter, Beulah led 6-0.

On the first play after the kickoff, Bullock County fumbled it again with Beulah’s Quay Moreland recovering on the Hornet 41. From there, Coleman ran 11 yards and a first down on the 30. After a one-yard gain on the next play, Coleman fired a second TD pass, this one a beautiful strike to Makell Patrick in the back of the end zone. A try to two points failed, and at the 5:16 mark of the second period, the Bobcats had jumped out to a 12-0 lead.

Bullock County got on the board on their next possession with freshman quarterback Robert Williams running 47 yards off the left side of the line. The PAT made it 12-7 with 4:20 left in the first quarter.

The Hornets got the ball back after a Beulah punt and hurt themselves one more time with a fumble, this time on their own 14. Quinton Hale pounced on it for the Bobcats, giving the offense a great chance for another score. After an incomplete pass, Coleman kept it up the middle, running 14 yards for the Bobcats’ third TD of the opening quarter. A two-point play failed, but with the first quarter in the books the Bobcats looked in great shape, holding an 18-7 lead.

On their next possession, it appeared as if the visitors were all in on self-destruction when they went for it on fourth and four from their 31 and didn’t come close to making it. Beulah stuffed a running play off the right side of the line for no gain and took over on the Hornet 31. A 25-7 lead was tantalizingly in front of them, but that next drive would be a harbinger for the rest of the game. Instead of getting their fourth TD, a combination of penalties and lost yardage plays had the Bobcats going in reverse. Worse yet, they turned it over. The game had turned around when Bullock County recovered a fumble on the Beulah 40. It was their turn to take advantage of a short field, and they took it the distance. A 16-yard run by Jay’Markis Foster and Bryant Grant’s PAT narrowed the score to 18-14 with 3:05 left in the half.

In the final minutes of the first half, Beulah drives the ball deep in Bullock County territory before turning it over on an interception with 5;5 seconds left in the half.

The first half ended with Beulah holding an 18-14 lead.

The second half was all Hornets. They outscored the Bobcats 34-0 to the home a 48-18 win. Nothing went right for Beulah, and everything seemed to go right for the visitors. The disaster began with Beulah fumbling the ball away on their second offensive play of the half. The Hornets recovered and unveiled the Kendeous Owens show. The fleet-footed No. 4 burst off the right side to the Bobcat six on their first offensive play of the second half. He scored on the next play off the left side of the line. Arias-Pasquez’ PAT extended Bullock County’s first lead to 21-18 with 10:26 left in the third quarter.

It wouldn’t get any better. Even the stadium’s sound system playing Bon Jovi’s “Living on a Prayer” and the Rolling Stones’ “Start Me Up” couldn’t get Beulah untracked. It didn’t help that star running back Chris Person missed almost all of the second half after going down with cramps.

There were some oh-so-close moments for Beulah such as a perfectly thrown Coleman pass hit a wide-open receiver right in the hands, and he dropped it. Had he held on it would have been a touchdown. Another long pass play was just out of the reach of Andruw Cowell, who made a valiant effort to catch the ball. On the very next play, the ball was snapped over Coleman’s head and he had to recover for a big loss.

As the score would indicate, Bullock County had a big advantage in the statistics. They had 474 yards rushing compared to 91 for Beulah. Quarterback Dylan Coleman ran for 26 yards and one TD and was 9 of 18 passing. 107 yards and 2 TDs. He also had two interceptions.

Chris Person ran the ball 15 times for 39 yards. Sharman Smith, DeShawn Jones and Andruw Coxwell were the leading tacklers on defense. Smith had three tackles, one sack and a tackle for loss.

After a very disappointing loss, Beulah will have to regroup this week and go on the road to face a very tough St. James team. They will then close out the regular season with a home game versus Dadeville, a road game versus Pike Road and a home game with McKenzie.