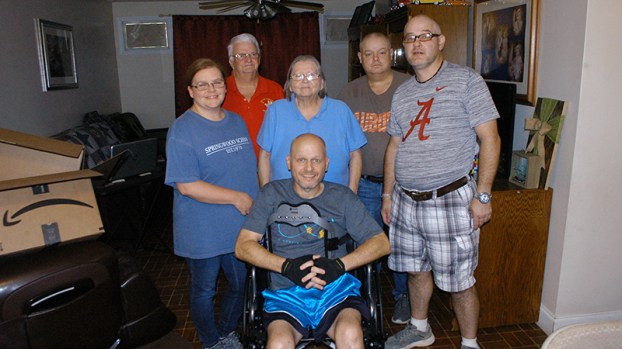 James Myers (in front) has made some significant progress in recovering from a staph infection but still has a long way to go to get back to normal. He has gotten ample support from family members, left to right, sister Christy Eddy, parents Hermon and Cheryl Myers, and brothers Jeffery and Tony Myers. “We want to thank everyone who has helped us through this,” said Mrs. Myers. “It’s unusual for us to be on the receiving end of help from the community. Especially this time of year, we are used to helping people through the Christian Service Center.” --Wayne Clark

VALLEY — For many a Thanksgiving and Christmas season since the mid-1970s, Cheryl and Hermon Myers have helped many families deal with crisis situations and provide for their families through the holiday season. This year they are dealing with their own family crisis.

Their eldest son, James, is recovering from a staph infection. He’s currently confined to a wheelchair, and it’s unknown whether he’ll ever walk again. Though he’s been through some excruciating pain, his attitude is excellent. He will go through extensive rehab to learn to walk again.

This is taking place during a busy time of year for the Myers family. Cheryl is the long-time director of the Christian Service Center, and this is the time of year she’s getting ready for both Thanksgiving and Christmas.

“James started having problems back in July,” Cheryl Myers said. “We’d gone somewhere and when we got back home we thought he’d pulled a muscle when he got out of the van. He was in intense pain and told us it was from his lower back. When the pain didn’t go away, we took him to Urgent Care, to the emergency room and to doctors, but no one could find anything.”

James was then taken for an MRI. When he got back home following the procedure, the pain was so intense he couldn’t walk. His condition worsened and by late August he couldn’t get up to go to the bathroom. An ambulance was called and when the paramedics saw his condition upon arrival they recommended he be taken by helicopter to Columbus to see a neurosurgeon.

“They found he had a staph infection on his spinal cord,” Myers said. “He had to have surgery. Two rods and eight screws were placed in his back. He’s had to take plenty of doses of antibiotics.”

James has undergone some extensive rehabilitation since then.

“This Valley is very fortunate to have the inpatient acute rehab unit at EAMC-Lanier,” Myers said. “They have a wonderful staff there. James was there for three weeks, and the physical therapists taught us a lot we could do for him at home. We would like to have him back in rehab, where trained people can continue to help him.”

James is going through something that takes a long time to recover from.

“It’s something you’re unprepared for,” Myers said. “It’s something you would never expect to happen in your family, but it’s the kind of thing that can happen anytime to anyone. Staph is everywhere, and there’s no way of knowing where you can get it from.”

A staph infection is caused by the staphylococcus genus of bacteria. These bacteria are commonly found on the skin, especially around the nose and can enter the body through a cut or abrasion, which may be nearly invisible. Once inside the body, the bacterium can spread to many areas. If it gets to the heart, it can cause someone to go into cardiac arrest. Antibiotics are the main known treatment for staph infections. Where possible, a damaged area can be drained. In some cases, strains of bacterium have become resistant to the antibiotics.

“James will have to keep taking antibiotics for the next year,” Myers said. “Hopefully, he can change to pills at some point. Since he’s been home, we’ve been doing IV infusions every four hours. He’s in real good spirits. We are real proud of him for that, especially given what he’s been through.”

“I want to be able to go to churches and tell people what God has done for me,” James said. “I would like to be able to speak to a lot of churches.”

“The community has helped us so much,” Myers said. “I want so much to thank everyone. My great fear is leaving out someone who has helped us. We just want everyone to know we appreciate each and every one of them and their thoughtfulness.”

Myers said that at first she felt a little embarrassed and that everyone was going overboard by bringing them food every day.

“It really helped us,” she said. “We were spending so much time with James and treating his condition.”

Myers said she has nothing but good things to say about the medical community.

“We have dealt with some wonderful doctors,” she said. “They have done everything they could to help him. When it comes to helping each other, this Valley has the best people. We are so used to helping others, it’s different for us to be on the receiving end. I want everyone to know that our family has learned so much from this experience. I think we can use it to help others in the future. We will be better servants going forward because of this. We have truly been blessed. People have done so much for us.”

Myers said there is a higher power behind the work she does.

“I can remember one Christmas Eve when we got home and all we wanted to do was sleep. We were so tired. We heard a knock at the door, and I answered it. There was a woman with a little girl standing at the door on one of the coldest Christmas Eve nights I could ever remember. Both were shivering in the cold. She told us that someone had left her with the child and she felt bad because she didn’t have anything to give her for Christmas. I started to tell her we had given everything away but I told her I would go and look. I went and looked in a big box we had that had been filled with gifts. I thought I was wasting my time because I knew I had looked in it several times, and it was empty. I looked in it anyway and couldn’t believe there was a coat and a pair of mittens for a little girl. We tried them on her, and they fit perfectly. I still cannot explain how that coat and mittens were in there.”

There was also the time when the freezer went out at the Christian Service Center building in Huguley.

“It wasn’t working, and I unplugged it,” Myers said. “I just knew we were going to lose everything in it. A man then drives up with a new freezer on the back of his truck. He told me he’d been sleeping when God awakened him and told him there was a need for that freezer. I hadn’t had time to talk to anyone about our freezer going out, and there was the solution to our problem. When you do this kind of work, there is a higher power helping you.”

James’ condition is the family’s top priority, but it’s not slowing down the work of the Christian Service Center.

“The best thing we have going is that we have so many wonderful volunteers who have been with us for a long time and know what to do,” Myers said. “The next big step for us is Thanksgiving. Lots of churches, school groups, civic clubs, businesses and individuals help us with it every year. We have a big food drive in October that really helps. Our goal for Thanksgiving is to help people have a traditional Thanksgiving dinner. We gather meal, flour, sugar, shortening, cake mixes, canned fruit, jelly and yams this time of year. We usually have enough green beans and corn we have gotten through the year. People are good about donating certificates for hams and turkeys. That helps a lot. People have come forward to help us with Thanksgiving this year, and we appreciate that. People are so generous, and they have been for a long time. I can’t think of a need we have had that wasn’t met.”

The Christian Service Center will likely help between 75 and 100 local families for Thanksgiving. There’s an even bigger push for Christmas.

“Last year, we had over 600 children and 110 adults we helped with Christmas gifts,” Myers said. “We also helped some people with food boxes.”

The CSC is prepared for last-minute requests.

“We always have some people who walk in and apply right before Christmas,” Myers said.

“Local schools are good about helping us. They let us know of families that are struggling and in need of help during at the Christmas season.”

Every year, there are families asking for help who have never done it before.

“Something happens and they need help during the Christmas season,” Myers said. “They get back on their feet again and don’t have to ask for help the next year. In many cases, these same people are making donations the next Christmas. That’s the best kind of giving back there is.”

“Right now, we need toys for boys and girls in the 8-12 age group,” she said. “In other years, we may need them for younger children or for teens. Some years is all girls and some years we need more donations for boys. People are good about calling us before they start to buy the gifts they donate. They help. The best time to start buying for Christmas is Dec. 26. Everything is on sale, and we can keep it until the next Christmas.”

Thanksgiving Day will be special for the Myers family this year. It will fall on James’ 52nd birthday. Brothers Jeffery and Tony are 49 and 45.

“Thanksgiving is always a good day for us,” Myers said. “All of my family is here, and a lot of friends come by to see us. We have a lot of be thankful for. Our needs are being met, and we are grateful for that. We are looking at getting a van James can easily get in and out of, and we’d like for him to have some ongoing physical therapy. We are taking things one day at a time, and that’s all we can do. Dr. Goldman, who did the surgery, has been very positive about everything, but he’s honest enough to tell us no one can say what will happen with James’ condition. We will keep hoping and praying for the best. On some days he can raise his right leg and on other days he can’t. I can’t say enough good things about the therapists at EAMC-Lanier. I will recommend them to anyone.”