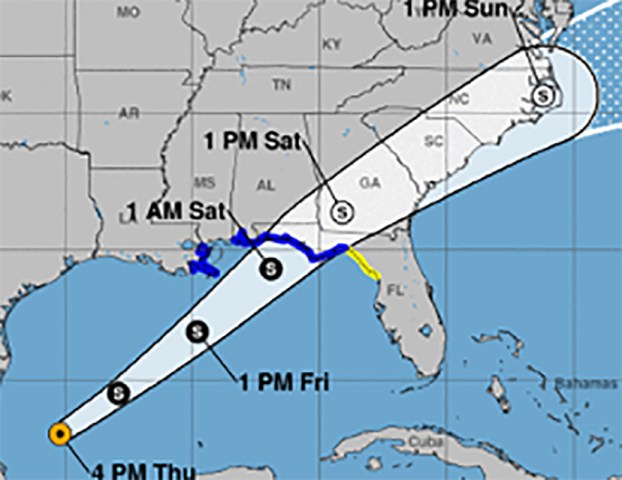 Photo by The National Weather Service.

By The Associated Press

MIAMI (AP) — A disturbance in the southwestern Gulf of Mexico is likely to become a tropical storm that will strike the northern U.S. Gulf Coast with high wind and heavy rains, forecasters said Thursday.

Moving off the eastern coast of Mexico, the low pressure system was expected to develop into a tropical or subtropical system late Thursday or on Friday, according to the National Hurricane Center.

Forecasters issued a tropical storm warning for southeastern Louisiana as well as the northern Gulf Coast from the Alabama-Mississippi line to the Big Bend area of the Florida Panhandle. A storm surge warning for the Florida Gulf coast from Indian Pass to Clearwater Beach also has been issued.

The disturbance, which could become Tropical Storm Nestor, had maximum sustained winds of 40 mph and was centered about 570 miles southwest of the mouth of the Mississippi River. It was moving to the north-northeast at 9 mph.

A tropical storm could bring as much as 3 inches of rain on the Florida Panhandle coast and as much as 1.5 inches inland. Arid regions of Alabama, Georgia and northern Florida were in the storm’s possible track.

Officials also fear high winds could destabilize the remnants of an 18-story Hard Rock Hotel that partially collapsed while under construction in New Orleans, killing three. Authorities in New Orleans said explosives will be strategically placed on two unstable construction cranes in hopes of bringing them down Friday with a series of small controlled blasts ahead of the approaching storm.

The system could still be a tropical storm on Sunday morning over eastern North Carolina before moving back over water, forecasters said.