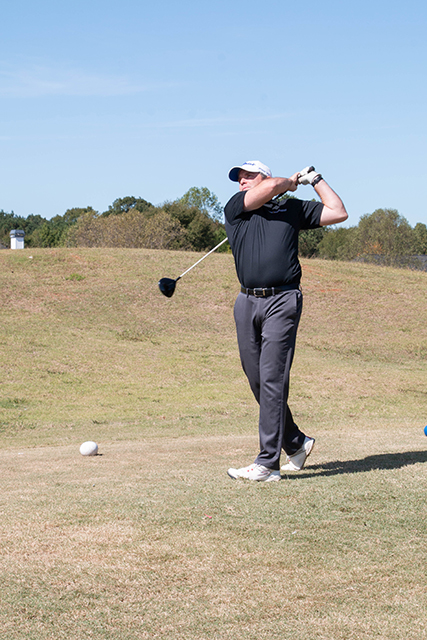 Allen Crawford on the Malone team watches his ball fly down the fairway. — Jenna Oden

The LaGrange-Troup County Chamber of Commerce’s golf tournament was originally started 15 years ago as a way to get more members involved with the chamber, and it’s still going strong today.

More than 100 players competed in the event. Interim President and CEO Kathy Tilley said the tournament was a great opportunity for golfers and chamber members to network with other businesses.

“It’s a great day for companies and our members to have a day of fun out here on the beautiful Field’s Golf Course,” Tilley said.

This year brand new faces have taken charge at the chamber, meaning this event was a first for Tilley and Leslie Traylor, director of member engagement.

“Even with that, we got great support from JJ Kuerzi, Jay Butts and the people at the fields have been extremely helpful because they knew it was our first year,” Tilley said.

Tilley attributes the success of the event to all the regulars that come back year after year.

“A lot of companies put in teams in the tournament year after year, which shows that they’ve had a great time,” Tilley said. “This morning was very cold, but people were coming in and they were playing. Even with the cold, they were having a lot of fun and really that’s what we want at the end of the day.”

This year’s presenting sponsor, J. Smith Lanier & Co, gifted each player with a bottle of Wild Leap Vodka, which was a hit among the players.

“I hope that at the end of the day our companies felt like it was a worthwhile investment and that the players enjoyed being out on a beautiful golf course,” Tilley said.

The chamber had so many players register for the tournament that they had to have two tee-off times — one at 8 a.m. and one at 1 p.m.

“We are playing a four-man scramble with best ball,” Butts said.

Additionally, the chamber had other small ways to win as well, including longest drive and closest to the pin. To add an extra flare to the tournament, players could pay $5 to take a shot of Fireball whiskey, in a kilt, and attempt a drive.