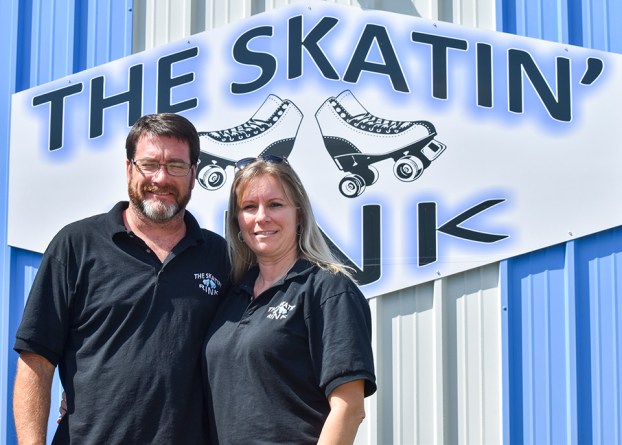 Carmen and Jason Turnham, owners of The Skatin’ Rink in Valley were the guest speakers at the Valley Kiwanis Club Wednesday. -- Dustin Duncan

VALLEY — Jason and Carmen Turnham have a rare kind of occupation.

Every day they get to relive the good times they had when they were young while introducing today’s youth to those same fun times.

They are the owners of The Skatin’ Rink on Fob James Drive. The couple said it is consistently getting big crowds on Fridays and Saturdays and playing host to birthday parties and other fun get-togethers during the week.

“Jason and I were born and raised in the Valley,” Carmen said to members of the Kiwanis Club of Valley at Wednesday’s meeting. “Then and now the skating rink was something close to our hearts. Owning and operating it today allows us to carry on the memories we have of when we were young to future generations.”

The Turnhams have had the business for the past six months, having bought it from Drayton and Nellie Henderson, who ran it for close to 40 years. Carmen said the Hendersons had something special with Magic Valley Skateland and have handed them a legacy they’d like to maintain.

“We ask for your prayers for them,” she said. “They are not in the best of health.”

The past six months haven’t been all fun and games for the Turnhams.

“There’s been some laughter, but lots of blood, sweat and tears,” Carmen said. “We have done lots of painting and put in new carpeting. We have re-done the party room, and we are putting up a new wall near the concession stand. Safety is our number one priority, and we will not tolerate fighting or bullying of any kind.”

There were some growing pains for the new owners in the first few weeks. There were some accidents, and eight boys and three girls were banned for fighting incidents. The Skatin’ Rink is located on Fob James Drive, right between Valley Police Department and the East Alabama EMS station.

“We are doing this to give back to the community,” Carmen said. “We are keeping our prices low so that the kids will keep coming back to have a good time.”

The Turnhams recently had the exciting experience of watching a movie being filmed at their skating rink.

Most of the forthcoming movie “Electric Jesus” was filmed on location in Columbus, Georgia with the skating rink scenes shot in Valley.

“When they contacted us they told us, they were looking for a skating rink that looked like something out of the 1980s,” Carmen said.

“They told us that ‘Electric Jesus’ is set in 1986. They looked at what we had and thought it was perfect.”

Some album covers had to be taken off the wall.

“They didn’t have the copyright for it to appear in the movie,” Carmen explained. “It was really interesting to watch what was going on from behind the camera. There were hundreds of people in the background. I was worried the skaters they brought in from Columbus would trip and fall on the wires they had running everywhere, but they managed to do it without a fall. They were really good. The crew took over our party room when they were here. We didn’t get to see the makeup and the wardrobe portion of movie making. That went on at the Community Center.”

Carmen said the effect was amazing when they blew some artificial fog inside the building.

“It was something to see the lighting through the mist,” she said.

Jason Turnham said that they are planning on having a Halloween party at The Skatin’ Rink on Saturday, Oct. 26 and a New Year’s Eve party on the final weekend of 2019. “Those events should be lots of fun,” he said. “We will also be hosting a Christmas party for Knauf employees and their families.”

Friday nights are the busiest periods at The Skatin’ Rink. Somewhere between 130 and 150 young people are there. The number is usually around 100 on Saturdays.

It’s best for beginning skaters to be there from noon until 4 p.m. on Saturdays. It’s not good for those in the 8-12 age group to be on the course on Friday nights, when faster teen skaters could run into them. Skill level doesn’t necessarily follow age.

“One of our best skaters is only seven years old,” Jason said. “She can win races.”

While most skating rinks tend to be open till eleven o’clock on the weekends, the Turnhams like to close a little before then.

“By closing at 10, the parents have plenty of time to pick them up and have them back home before you have people who have been drinking out on the road,” Carmen said. “We treat them like they’re our own kids. We want them to be in a safe environment and to act like young ladies and gentlemen.”

Jason said that he and Carmen want to continue on with the family-friendly traditions the Hendersons started at Magic Valley.

“They come by sometimes to see how things are going,” he said. “We are always glad to see them.”

“We have brought back all the old games,” Jason added. “We have scooter races and limbo. Some people like to come and watch, hang out at the concession stand and enjoy the music, and that’s OK.”

The Turnhams have considered having roller derby at The Skatin’ Rink.

“We will have to have more in-line skaters to do that, and they will have to own their own skates,” Jason said. “Skates are better made today than they once were. If you oil them and properly maintain them, they can last a long time.”

“We have a mascot,” Carmen said. “He’s a little furry animal called Rock N Roller, and the kids love him. He will be in this year’s Christmas parade.”

Carmen said that birthday parties have been very popular.

“We decorate for you and provide all the paper products you need,” she said. “All you have to do is to bring the ice cream and cake.”

The upcoming Halloween party will have a costume contest. The first-place winner will receive a pair of skates, the second-place winner some light-up wheels and the third-place winner two certificates for admission.

“We will scare a little but have a lot of fun too,” Jason said. “You can have your photo taken with Freddie Kruger that night.”

Carmen said that Jason is very good at handling conflicts.

“If something comes up I tell them to talk to Mr. Jason. I’m busy cooking pizza,” she laughs.

There are security cameras recording everything that takes place. “We’ve had some parents tell us that their child would never do anything that could get them in trouble,” Jason said. “Then we show them the tape. If two young people aren’t getting along we will separate them and tell them to stay away from each other. If someone keeps trying to start something, we can ban them from coming anymore. All this goes back to safety. It’s our top concern.”

Being safe also goes to what youngsters can bring inside the building. Girls are allowed very small purses for personal items; the boys aren’t allowed to have any kind of carrying case. This is to control alcohol, drugs and weapons.

“We are still new at this,” Carmen said. “We welcome suggestions and any kind of feedback.”

Carmen added that the concession area is kind of like a bar for kids.

“They will sit and tell me their troubles,” she said. “I want to thank the community and the city for being so supportive. We want everyone to know that the money we make will be going back into improvements in the building.”

Jason said that skating is a great form of exercise.

“It’s better than walking,” he said. “You use all of your muscles and can burn up to 600 calories an hour.”