OUR VIEW: Hoping for a miracle 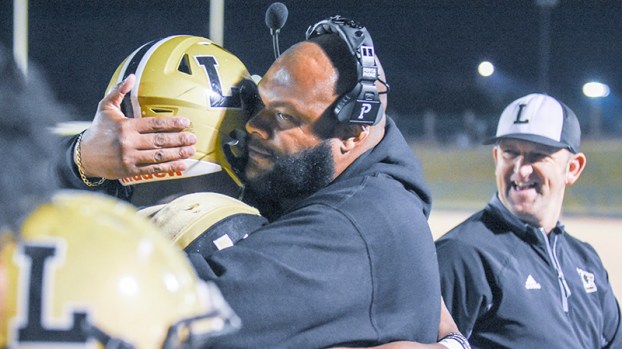 Lanett quarterback Kristian Story gets a hug from his dad and coach, Clifford Story, after breaking the all-time record for career touchdowns. Below, Story is shown throwing the pass that broke the record. --Daniel Evans

We know Lanett head football coach Clifford Story — and the rest of the Panthers — are looking forward today. That’s what you do when you are playing in the 1A state semifinals on Friday night. However, we think it’s fitting to look back at state history made in our backyard.

Lanett quarterback Kristian Story made headlines across the state on Friday night, breaking two all-time AHSAA records. Following Friday night’s six-touchdown performance, he’s the all-time leader in touchdowns accounted for and has the most yards in state history.

Both records were previously held by Pinson Valley’s Bo Nix, who is better known now as Auburn University’s starting quarterback.

Story now has 12,528 yards in his career and 166 touchdowns — incredible numbers that may not be broken for a long, long time. (Of course, Nix’s records were broken in a year, so who knows.)

First, it’s clear that Kristian Story has taken his place as one of the all-time best high school football players in the state of Alabama. Regardless of whether he played 1A, 4A or 7A football, Story has proven he can play with anyone on any field in the state. The numbers prove that.

The two milestones are also a testament to his health and determination to play through injury.

Remember, last year, he had a shoulder injury that he played through all season.

Third, you don’t break records without a lot of talent around you, and Lanett has proven that as a 1A powerhouse the past handful of years. The Panthers have gone 48-5 the last four years (37-2 the previous three) and have had numerous players go on to play college football.

Story is committed to Alabama and Trikweze Bridges signed with Oregon just last year. There’s a reason the Panthers are still in the running for their second title in three years.

We also think it’s important to point out how the record was celebrated Friday night. It almost felt like just another touchdown. After he broke the touchdown record, Story didn’t do anything over-the-top to celebrate. He found his brother and then his dad — both for quick embraces — and then it was back to football.

If 2019 is the era of the “all eyes on me athlete,” then Kristian Story must’ve missed the call. He’s anything but that. That’s a credit to his parents, school and this community.

After the game, he posed for pictures with anyone who asked for one, but when his dad blew the whistle for the team to huddle up, he took off.

Friday’s game was the last time Kristian will ever play on a football field in Chambers County.

Technically, his last home game as a Panther was two weeks ago, since last week’s game was moved to Ram Stadium in Valley. The Panthers would play their next two games on the road — at Sweet Water on Friday and potentially a state championship game on Jordan Hare Stadium on Dec. 5.

Therefore, it was fitting both records fell Friday, in Chambers County, where so many of his touchdowns were scored.

They say it’s a bad idea to read your own headlines, especially during a playoff run. However, we hope the Storys, and this community will take a few minutes when the season ends to look back at Kristian Story’s incredible journey.

We’re also sure Kristian would trade both records for another state title.

We wish the Panthers luck as they move forward in the 1A playoffs this week. This community is behind you as you work toward another championship.