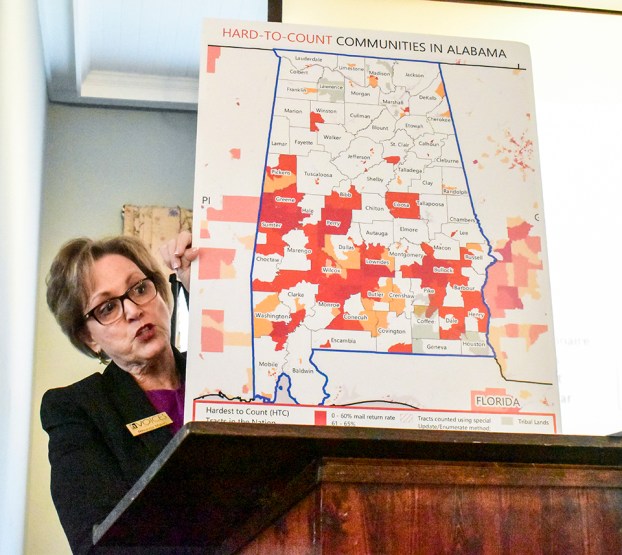 VALLEY — Voices for Alabama’s Children made a stop in Valley Thursday to emphasize the importance for counting children in the upcoming 2020 U.S. Census.

Rhonda Mann, deputy director for Voices, said in 2010, Alabama had 17,380 children under the age of five who were not counted. Most of those uncounted children came from homes that returned the census to the government.

“So, what we have here is a problem of education,” Mann said. “Where to count people and who all counts in the household are the questions. People (who work with) the census have that information.”

Children in low-income housing are also historically undercounted, according to the census. Mann said counting these children helps to determine the amount of federal funding for an area for programs such as food stamps, the National School Lunch Program and the Children’s Health Insurance Program.

Newborn children have also been undercounted, according to the census. Parents should count babies on census forms, even if they are still in the hospital April 1.

Mann said the data counted, especially those younger children, is used to determine the future needs of a community.

“If we don’t have a head count, and we don’t know the age of people in our community, how do you know if you need more schools? Or if you need more nursing homes? Do you need more hospitals? And are you going to need OBGYN services in your hospital?” she said. “Those are the kind of questions you can determine from the analysis of the data that’s collected during census.”

The 2020 census also has critical importance for Alabama’s Congressional voice as it’s been reported the state could lose two seats in Congress if the state population drastically drops. Moreover, for financial reasons, Mann said in 2010, when all the numbers were counted in the U.S., each Chambers County resident resulted in about $1,600 in federal funding. She said it’s impossible to know what the actual number will be in 2020 until the complete count is finished.

Yolanda Fears, the U.S. Census specialist assigned to Chambers County, said it’s important to remember the money follows the number, not the need.

“It does not matter how many kids you have that need a service, if the funding is not there, it is not going to be there for 10 years,” she said. “So, it is extremely important that we count everybody, and we count them in the right place.”

Most homes will receive an invitation to fill out the census by letter between March 12 and 20. A majority of those homes will be asked to fill the form out on the internet, except for areas where they typically don’t receive mail at their home.

Homes can expect to receive a reminder letter the following week to fill out the census. Jones said if households haven’t responded by March 26, they will most likely receive a reminder postcard. If homes still haven’t filled out the survey, he said they will get a reminder letter and a paper questionnaire between April 8 and 16. Between April 20 and 27, there will be a final reminder postcard before the government follows up in person.

The pay for these jobs starts at $15 an hour. The job requirements are you must be 18 and have a valid driver’s license, must be able to pass a background check and must have a valid social security number. Workers are able to create their own work schedule, working part-time or full-time.

Jim Eldridge, who is helping lead the search, said they need to hire 54 more people. Eldridge said if they cannot find workers in Chambers County, they’ll have to look elsewhere.