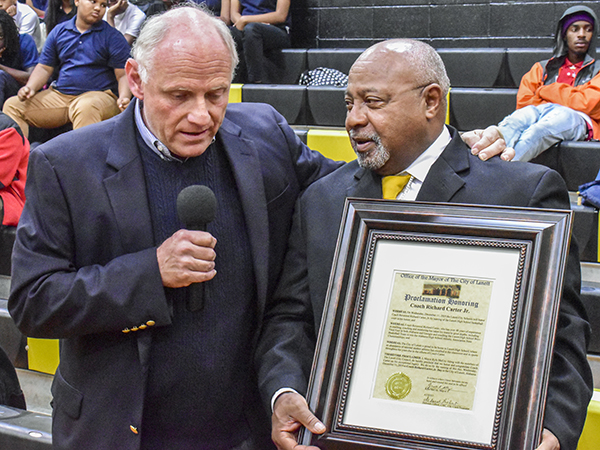 A living legend: Rev. Carter honored by Lanett after 11 years of coaching

Lanett— After working in Chambers County for almost 30 years as a teacher and coach, Lanett High School immortalized the Rev. Richard Carter on Wednesday, when it renamed its gym in Carter’s honor.

“I’m speechless. I really don’t know what to say, because of something I’d never envision that happening to me in my life,” Carter said. “It happens to people after death, not while living and so to have something of this nature to happen to you by your yet alive. Oh man, it means so much.”

The one-hour celebration of Carter’s achievements started with Carter and his family walking through the gym doors to a standing ovation of Lanett students, staff, coaches and Carter’s former students and athletes.

“It means so much. It says to me that I must have done something right,” Carter said. “I’m not sure what it was, but it means the world to me because I love those kids. I’ve always had great students. And we have great students here at Lanett.”

After Carter and his wife, Brenda Carter, reached their seats, the full gym was given Carter’s backstory by Hilda Carlisle, who took the congregation through the coach’s path to Lanett.

She was followed by Lanett Mayor Kyle McCoy. He spoke about Carter’s legacy as a teacher and coach.

“Today, we are dedicating this court in his honor, but his legacy will live on far beyond this court,” McCoy said. “It will live on with each and every one of you, who have had the opportunity to been influenced by him. That is probably one of the greatest attributes that a coach, a teacher, a mentor will ever have an individual.”

Superintendent Jennifer Boyd, who used to be a principal of Lanett High School, followed. She brought up memories of her days first starting as the Panthers’ principal.

“He was respectful to me, but not only [was he] respectful, he helped me,” Boyd said. “I could always count on Coach Carter. If I was having an issue, he was always there.”

Ronnie Tucker, who played for Carter during the mid-1980s while at Valley, brought up memories of playing for Carter. He talked also talked about how Carter mentored him.

“Once you go to college, you’ll see you’re not the best thing in the world,” Tucker said. “But by him being in the mentor that he was to me, and taught me what he taught me, I was able to handle that. I never thought about coming back home, like kids do sometimes. You get afraid, you want to come back home. Oh no, he prepared me for that. And I thank him. I enjoy playing for you. I enjoy come here watching you coach these guys.”

Now that he is nearing the end of his coaching tenure, Carter has been called a legend, but he doesn’t consider himself one.

“I’m just a teacher and just a basketball coach. I’m just a pastor,” Carter said. “I guess later on in my life, I’ll figure out what a legend is. But right now all I know is I just teach coach, and I’ve been the most blessed man in the world.”

“When I look back over my career, how many coaches do you know, can say that they’ve coached young men, at least 10 to 12 young man that played in the NFL, again at the NBA, and not counting those who played overseas. Not very many. That’s a great accomplishment. But when I look back over my history that I can say that I have at least 50 young men that I can count that are in the ministry. That’s my blessing.”

In all his years of coaching, Carter had never claimed a state championship ring. He had been close several times. That was until 2016 when the Lanett Panthers claimed the 2016 2A State Championship.

“Lanett made a dream come true,” Carter said. “I’ve had a lot of teams reach the final four, but I was still chasing that ring.”

After the season, which will be his 49th year as a coach, Carter plans to step away and retire from coaching. This season he will still have the same goal that he had 48 years ago — win a state championship.