Circle of Care to launch parenting classes for inmates 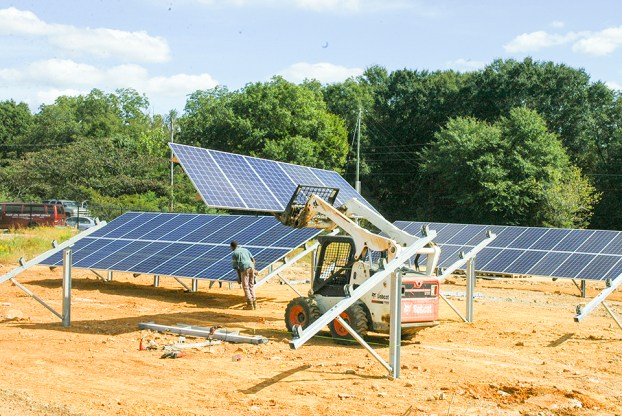 The Alabama Municipal Electric Authority has installed a set of solar panels in Lanett along Highway 29. AMEA has installed similar projects in nine of its 11 member cities. -- Photo by Wayne Clark

LANETT — The Alabama Municipal Electric Authority, along with the City of Lanett, will dedicate a new 50-KW solar research project next Tuesday morning along Highway 29.

The Lanett Solar Research Project, located at 119 S. Gilmer Avenue, will host a dedication ceremony at 10 a.m. on Tuesday, Dec. 10.

“We are proud of the new solar research project in Lanett as part of our effort to enhance renewable energy in our portfolio,” said Fred Clark, AMEA President & CEO. “We want to thank the City of Lanett and the Chambers County Development Authority (CCDA) for its leadership and partnership in this endeavor.”

According to a news release from AMEA, the electric provider partnered with the city and the CCDA on the purchase of the 27-acre Lanett mill site. Recent additions to that site have been the solar project as well as the Tractor Supply Company, which has been rapidly constructed.

According to Lanett Mayor Kyle McCoy in October, AMEA is leasing the three-quarters of an acre from the city and there are 164 panels. He also said there could be more amenities added to the sites in the future.

“Hopefully, within the next couple of years, we will have electric car charging stations at these research stations,” McCoy said. “AMEA is looking at doing this in their member cities. The technology and the demand are getting there. We need to learn to enhance it. This is going to be the future.”

AMEA said the Greater Valley Area Chamber of Commerce would also be part of the dedication. A similar project was completed in April 2018 in LaFayette.

Frequent questions that arise from a solar project are if the solar panels will have an impact on residents’ electric bills. According to the AMEA, that answer is no.

“The construction of this solar project and the other solar projects planned in AMEA communities is meant as a fact-finding effort to better understand all aspects of solar generation,” the news release from AMEA said. “AMEA’s solar projects will be blended with its other resources, and through this initiative and others, AMEA will strive to keep its electric rates among the lowest in Alabama.”

While there may not be any benefit from a cost-saving measure, the panels are completely safe in the community. AMEA says a solar project is about as safe as a facility can be. There are no air emissions from the facility, and there are no chemicals.

“No trucks will be coming and going on a daily basis once construction is complete,” the news release said. “The power will leave the solar project on lines just like the power lines in your neighborhood.”

The rain date for the dedication will be 10 a.m. Wednesday at the same location.