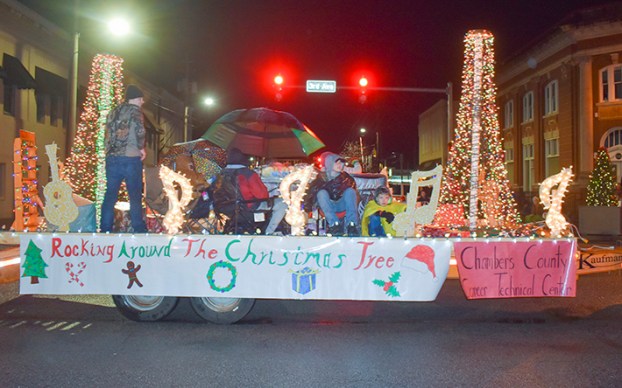 WEST POINT — Rain did not hold back the Valleywide Christmas Parade Thursday night.

Light showers continued off and on through the evening but the participants, many of them children, were still excited.

“We get to see different people, learn new things and decorate. It was fun,” said Tori Hodge, a student at Fairfax Elementary.

A truck full of Fairfax students was waiting for the parade to start.

“It’s amazing. This is my first time,” Fairfax student Nevaeh Huguley said. “I liked decorating and being on the float. It’s really fun.”

“I’m very proud and pleased.  It’s an honor for me,” she said. “This community means a lot. This whole area has been good to us.”

Valley mayor Leonard Riley said he was glad to see the crowds waiting, and hoped the children would be able to keep dry, but said he knew everyone would enjoy the parade.

“The weather won’t dampen the spirit of the season,” he said.

“It’s not the first time,” he said of rain on a parade night. “But it’s still a good turnout and will be lots of fun.”

Valley Recreation Director Laurie Blount was one of the event’s coordinators. Her team was ready rain or shine.

“The parade must go on. You can’t stop it,” she said. “The floats are great. Everyone did a really good job this year. Every year they just get better and better, and more creative.”

Some of the creative floats included a Snowman Salad Bar from Terri’s Mill Village Café, created by Terri Culpepper.  A collection of transportation themed entries included a Christmas tree made of tires pulled by Party Bus Rentals and followed by CT Automotive, CT Collision, and Penton Karting.

Stephanie Core, general manager of Jacks in Valley, brought her whole team with their kids and grandkids to wave and hand out Jack’s coupons. It was their first Christmas parade.

Carrie Royster, Executive Director of the Chambers County Chamber of Commerce was handing out trophies to award-winning entries.

“Any day’s a great day celebrating our community,” she said. “We’re thankful for our businesses who came out for the parade.”

Zaxby’s came in first in the business category. Terminix was second and East Alabama Medical Center came in third.

In the community entries, winners were the City of Lanett in first, Missiles for Christ second, and the Valley Swim Team third.

Paige Braswell was on the first place Zaxby’s float. She said the entire Zaxby’s Valley crew worked on several ideas, but this one was Jessi Minor’s idea.  The float was called “Christmas Favorites” and featured endearing characters from Home Alone, A Christmas Story, How the Grinch Stole Christmas and Christmas Vacation.

“We had to come up with ways to run lights and keep us dry,” Braswell said. “We wanted to do this regardless of rain.”

ACTS Academy’s third-place entry was a float with singing elves who put their own twist on Jingle Bells and Rudolph the Red Nosed Reindeer. They were led by Earl Bryant.

“We get to spend time with our family and friends, sing Christmas songs, and have fun with the crowd,” singing elf Ava Brown said.

Giaxon Woody was singing on the Norbord gingerbread house float with his mom Erica Woody alongside.  Norbord had three vehicles in the parade, a manger scene, the gingerbread house with a movie playing, and a logging truck.

“We’re here for our community,” Norbord general manager Gregg Weissman said.  “We want our outreach to be bigger than our walls.”

Fairfax Masonic Lodge was a returning group in this year’s parade.

“I like the environment. It’s a messy day today but I still like it,” lodge member Jessie Stephens said.

Perhaps the most popular dignitaries were members of the state champion football team, the Lanett Panthers.

West Point mayor Steve Tramell said if anyone was unable to make it to the parade, it will be available on social media afterward.