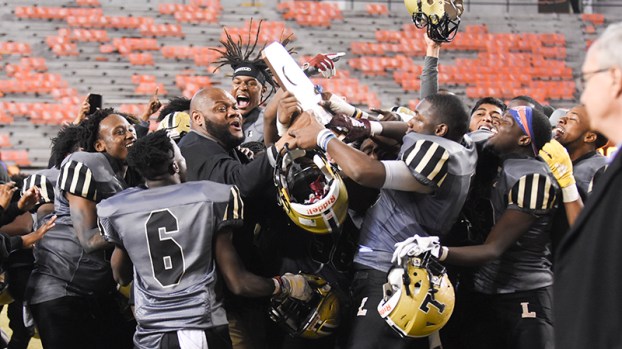 OUR VIEW: Lanett deserves its own parade

The Lanett Panthers varsity football team had a fantastic season that is worth individual recognition.

Not only did the team go undefeated, but it also pitched five shutouts, including one in the first round of the ASHAA 1A playoffs. Four of those shutouts came in four consecutive games.

These young men left destruction in their path for much of the season until they traveled more than three hours away to Sweet Water. That game resulted in one of the best finishes a fan can hope for watching a high school football game. Lanett scored in the final minute for a 42-35 victory and a trip to the state title game.

The Panthers also were led by one of the most remarkable high school careers in state history.

Kristian Story is the all-time touchdown and yards leader in the state of Alabama, finishing with more than 13,000 yards for his career and 175 career touchdowns. He was also named the MVP of the state championship game and the Alabama Gatorade Player of the Year.

We could go on and on about how impressive the Panthers were this year.  With everything being said, this team deserves a parade of its own. We have heard the team will be part of the Valleywide Christmas Parade Thursday evening, and that’s great. The team should definitely be involved in the parade.

However, this team’s performance, hard work and championship run is worthy of individual honors. Lanett is used to winning state championships in football, basketball and track in recent years, but that doesn’t mean winning is easy. Nor does it mean it won’t be a while before the black and gold is on top once again.

So, why not celebrate this team now?

It may not be a bad idea to take a look at what the city of Valley did for the 9- and 10-year-old All-Star little league team. Those kids were everywhere after winning their world series title this past summer. Valley hosted a parade and a special celebration honoring the team for its accomplishment.

Lanett should take a similar approach and make sure the team is appropriately recognized by the community for its accomplishments and not just thrown in with the rest of the parade coming Thursday.