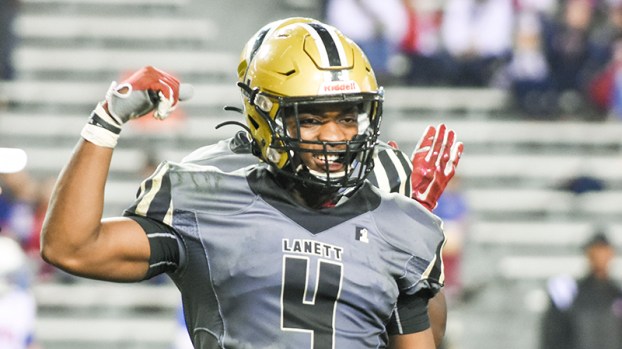 AUBURN — It was only fitting that somehow, someway the ball ended up Kristian Story’s hands for Lanett’s game-ending interception Thursday night in the 1A state championship.

The Lanett quarterback had already scored four touchdowns on his way to MVP honors, and he’d also recovered a fumble. After the interception, he threw the ball high into the air and started celebrating.

The interception put Thursday’s game away officially, as Lanett topped Mars Hill Bible 41-30 for the title.

The Alabama commit finished his high school career with more than 13,000 total yards and 175 touchdowns — extending career records he already owned. No one else in state history has ever eclipsed 13,000 yards or even 170 touchdowns.

“It means a lot because I have the most touchdowns in state history, and that’s nothing I would’ve ever dreamed of around eighth or ninth grade when I was just playing wide receiver,” Kristian said. “Going into my tenth-grade year, when people said I wouldn’t be good at quarterback or our team wouldn’t be what we were with me at quarterback. It just shows that with hard work anything can happen.”

Kristian has led the Panthers to two state championship victories, with the first coming in 2017.

“These four years, I wouldn’t trade them for anything in the world,” Story said.

“Being coached by my father, my mom on the sideline. I am related to and grew up with all of these guys. We grew up together starting in elementary and to see it now, it’s the best feeling in the world.”

Lanett head coach Clifford Story said he’s been extremely tough on Kristian, his son, but that it’s paid off.

“People don’t understand how hard it is to play for your dad because he is going to hear it at the breakfast table, dinner table, when we get home, all throughout the game,” Clifford said. “I always told him that no matter what you may not be the most talented player, but don’t let anyone outwork you.”

Kristian played cornerback on the Lanett varsity team as an eighth grader, after his dad decided to move him up because he wasn’t being challenged enough at the junior high level.

He then was a wide receiver during his ninth-grade year before moving to quarterback.

“The rest is history,” Clifford said.

Kristian said he told his dad at the beginning of the season that he was going to do all he needed to recover from offseason shoulder surgery.

“I told him I was going to do all I needed to do to get back and help this team win the state championship, and I did,” Kristian said.

Story’s goals will now swap from high school to college, and he’s committed to Alabama.

“I want to go in and work hard and compete for playing time,” Kristian said. “Whatever position it is, I’m looking forward to it.”

Kristian said it did mean something to win the game at Jordan Hare Stadium in Auburn too.

“The last time my recruiter from Alabama talked, I said ‘y’all didn’t come home with the W, but I’ve got y’all this time,” Kristian said.

He’s also got his name all of the Alabama High School Athletic Association record book.