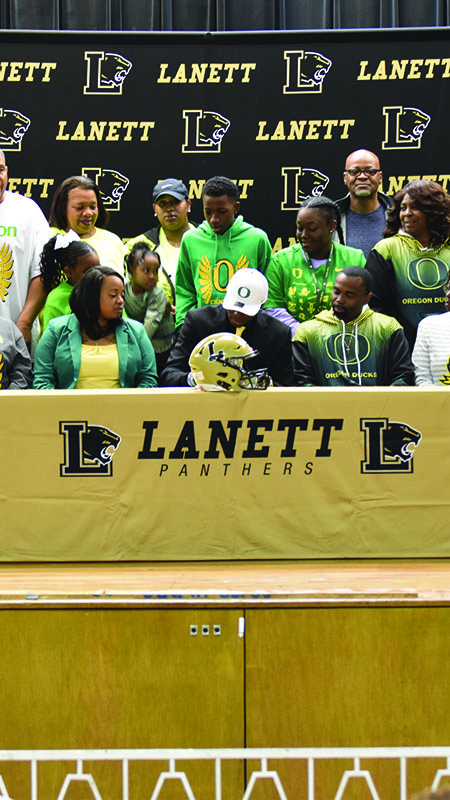 Trikweze Bridges signs his official letter of intent in December of 2018.--File Photo

Lanett football has had an abundance of talent the last decade, as the Panthers have had at least one player sign to play college sports in every year since 2009. Kristian Story is the most recent Panther to sign, even though a couple of others have committed, but one of the more memorable players in recent history was Trikweze Bridges.

Bridges signed to play football for Oregon on Dec. 19, 2018, making him the first player from Lanett to sign on the first National Signing Day in December instead of signing on the traditional day in February.

Bridges signed as a safety, but because of depth issues, the Oregon coaching staff moved the 6-foot-3 freshman to cornerback, a position he had never played before.

Bridges stayed at cornerback throughout the season and continued to develop at the position.

“I had my days where I struggled from being in a very different position and keeping my eyes of the quarterback, but over time I grew some discipline and started liking playing cornerback a lot more,” Bridges said.

Alongside the transition to corner, Bridges also had to do something he had never done before— sit out. Bridges redshirted his freshman year, seeing action in only one of Oregon’s 14 games.

“Being redshirted at first was very stressful but over time, I learned that it was the best thing for me. It made me hungry to want to be on the field, so I am continually doing whatever it takes to get on the field,” Bridges said.

Oregon’s defense was one of the best in the country for most of the 2019 campaign, allowing 10 or fewer points in seven games.

The Ducks return most of their starting defense from the roster that won the Rose Bowl, as they lose just three starters. Two were outside linebackers, while the third was the starting MIKE linebacker. The secondary is completely intact from the previous campaign, which brings a lot of experience, which helped Bridges’ transition go a little smoother during his redshirt.

The tough part about bringing back the entire secondary, is there aren’t holes to fill, which makes it tough for Bridges to break through and see the field.

In order to break through, Bridges put in a lot of work in the offseason, primarily working on learning the movements of a cornerback better. He also put in time in the weight room, as he gained five pounds since the start of the 2019 season.

“The offseason was a grind,” Bridges said. “It was the time given to me to work on anything that I wanted to improve on on my own time. I had to manage that with early morning workouts, meetings, and classes.”

Before spring football was canceled because of COVID-19, Bridges was part of the second team cornerback group, according to Oregon beat writer Erik Skopil.

“I was really looking forward to comparing my first year there to this spring scrimmage,” Bridges said.