After 14 years, Dr. Phil Tranqui to move on… 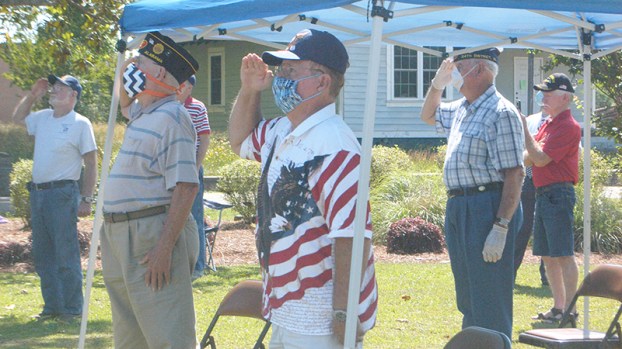 VALLEY — There was both looking back and looking ahead at Monday’s Memorial Day program at Veterans’ Park. The looking back was in appreciation to those Americans who gave their lives in the defense of our country and the looking ahead to a time when the coronavirus will no longer pose a threat to those who gather for holiday events like Memorial Day programs, family get-togethers and a day at the beach.

A modest crowd was on hand for Monday’s program hosted by American Legion Post 67. Many, if not most people present, were wearing masks.

“I want to thank everyone for being here today,” Post Commander Lanny Bledsoe said at the 11 a.m. event. “This is a day we recognize the men and women who died in service to our country. I hope we can get back to normal one day. This virus has killed close to 100,000 Americans this year. A number of those who died were veterans who served our country in past wars. It’s a shame that our veterans’ homes are not the safest places to be right now. Those who served our country deserve the best care they can get. We owe a debt to them for what they have done. Honoring the ones who have died is the reason we are here today. We enjoy our freedom and our way of life because of them.”

Bledsoe noted the four granite monuments in the park. They contain the names of 93 men from the Valley area who went off to war and never returned.

“Each one of these names carved in granite was a young man from our area who answered the call of duty,” Bledsoe said. “Each one expected to come back home and to resume their life. Sadly they didn’t. They today lie buried all over the world in places most of them had never heard of before being sent there.”

Bledsoe said that honor and respect should be extended to those veterans who answered the call and who did return home.

Most of them had full, rewarding lives after their military service. Bledsoe said that he and other members of Post 67 have been saddened by the recent loss of three fellow members. They include World War II veteran Bernard Paschal, Korean War veteran Ned Burton and Vietnam War era veteran Gene Clark. Each one died of natural causes in the past few weeks.

Recognizing Valley Mayor Leonard Riley in the crowd, Bledsoe thanked him for the city’s support of Post 67 and especially for the outstanding job being done in the upkeep of Veterans Park.

“We enjoy supporting our veterans,” the mayor said. “We have been living through an unusual time being all locked up for some of the way. I knew the three members you recently lost. They were good men.”

“It’s hard to recognize people with everyone wearing masks,” he joked.

Bledsoe thanked Juanita Abney and the women of the Post Auxiliary for placing a red, white and blue wreath underneath the park’s flagpole. He then called on Mr. Paschal’s daughter and son-in-law, Janice and Tommy Fields, to place a red rose on the W II Monument. Korean War veteran and Post 67 member Johnny Miles was called on to place a rose at the Korean War Monument.

“The Korean War has often been called a forgotten war,” Bledsoe said, “but over 50,000 Americans were killed there.”

“Thankfully it has only one name, but that’s one name too many,” Bledsoe said.

Bledsoe had some good news to report on a young man from the local area returning home from Afghanistan.

“Josh Anglin is back at Fort Bragg (North Carolina),” he said. “His parents, Shane and Tabitha Anglin, have gone to visit him. They are from River View. Josh is the grandson of Tommy and Donna Sides. Josh had to go through a 14-day quarantine when he got back.”

In closing, Bledsoe said that everyone across the U.S. had been going through something no one had ever experienced before. A pandemic like this hasn’t affected the U.S. since 1918.

“We’ve never gone through it before, and I hope and pray we never see anything like it again,” he said.