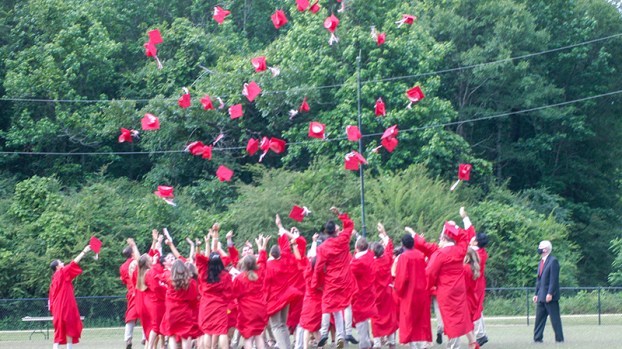 LANETT — Because of COVID-19 and the restrictions in place to deal with it, Springwood seniors gave up their classes, spring sports and prom this year. They finished out the academic year with distance learning, but did manage to complete the year with a Friday evening parade and a Saturday morning commencement on the field of Wildcat Stadium.

The 6 p.m. Friday parade began at the International House, proceeding a short distance west along Cherry Drive before turning on Wildcat Drive toward the school. The route looped around the stadium and returned to the point of origin. Many of the students displayed signs denoting their college destination. One guy wore a Bo Nix jersey and waved the Auburn flag while standing up through a sunroof. Another student was proud to be Clemson bound. Others were grateful to be heading to Troy, and there was even a future Virginia Tech Hokie in the procession.

The weather was gorgeous for Saturday morning’s outdoor commencement at the stadium. This is Springwood’s 50th year as a school and its 47th graduation ceremony. Dressed in their red caps and gowns, the students marched in from the left side of the field and though a wide central passageway through the seated guests and faculty, to the north end zone where a stage was set up.

“This represents the culmination of their studies,” he said of the program. “It is a rite of passage and something that will catapult them into their future careers. Thank you for your patience with the social distancing. We thank local authorities for allowing us to have this commencement today.”

McCown said he was pleased the school had offered some Christian-learning programs this year and that a student-led worship team had hosted chapel services. He credited the seniors on meeting their goal of setting a new record for scholarship offers. They set a new school record of $3,980,000. The previous record was $3.2 million.

“Mission accomplished,” McCown said. “There’s no doubt this has been an exceptional class. They had to adapt to a whole new educational way for their last 10 weeks of school. They had to give up spring sports and their prom.”

“Bubba kept Wildcat Stadium in immaculate condition,” McCown said. “The students wanted to dedicate this commencement to him today.”

“I think many people have felt cut off in their COVID experience,” McCown said, noting the seating being spread out at six-foot intervals on the football field. “I will say again that you seniors have had an exceptional year. No virus can defeat the work of the Lord and what he can do in your life. He can use your time to make you into what any of you can be.”

Before their senior year began late last summer, McCown had them at a retreat where he talked to them about life and goal setting. At one point, he pulled from his pocket a smooth river stone and talked to them about it. That rock, he said, was not always a smooth, polished stone.

“To get that way it had been tumbled around constantly by the motion of the river,” he said. “That beautiful stone is what’s there when all the rough edges have been worked off.”

As a unique gift of the day, McCown gave each student a polished river stone with their diploma. Each parent present got one too as they left the stadium.

In introducing this year’s salutatorian, Coleman Hull, McCown said that he was the kind of person who could make the world around him a better place. Hull said that he had become closer to God at Springwood, adding jokingly “especially outside Mrs. Thompson’s class before a math test,” Hull said that he had seen limitless potential among his classmates.

Their Springwood experience, he said, could serve as a valuable foot marker on their journey in life.

McCown introduced Class Valedictorian Andie Martin as someone who is constantly overflowing with joy and makes everyone around her happy.

“She’s a leader who makes things happen,” he said.

Martin said the past ten weeks had been trying for us all.

“These times make us appreciate all the good things we have,” she said.

She compared the current experience to the movie Groundhog Day, where a TV weatherman relives the same day over and over again.

“A quarantine is a lot like that,” she said. “Many of us have been driven close to the point of strangling a loved one or going too many days without taking a shower.”

“I’m here to challenge you to take these adversities we’ve all been through and to turn them into positives. Let’s not waste this moment. Don’t let the circumstances define your spirit.”

Martin said she would miss her classmates as she goes on to attend the University of Georgia.

“I will not forget the lessons I learned this year,” she said. “I won’t forget what I have learned from people like Mr. Freeman. I know I’m lucky for my two parents to be my two best friends. They mean more to me than they will ever know.”

At the end of the program, McCown told the new graduates that they could turn their tassels, symbolically meaning that their high school days were over and that they were ready for new and better things. Martin said a closing prayer and McCown led the group past the seated guests and teachers toward the north end zone where they had the ultimate joy of any graduation – tossing their caps high in the air in exultation.