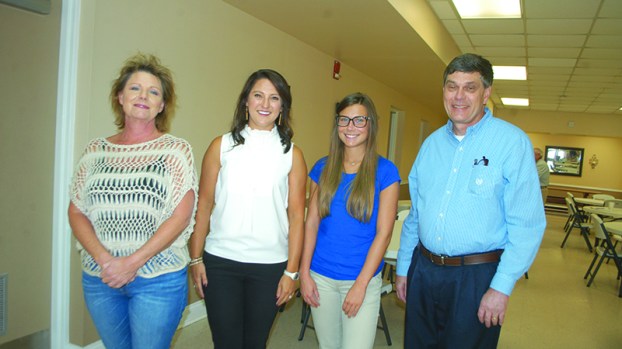 LANETT — Kimberly Carter, the director of branding and recruitment for the Chambers County Development Authority (CCDA), was the guest speaker at Thursday’s noon hour meeting of the West Point Rotary Club, held at the Jane Farrar Events Center in downtown Lanett.

During the months of April through June, when COVID-19 was taking a heavy toll, the work of the CCDA went on. The staff invested more than 170 hours in working to help local businesses. Carter said they’d been told by people in places like Birmingham that they weren’t getting that kind of help from a local organization.

“It’s invaluable,” she said. “When someone asks about Chambers County, we give them a copy. They are so glad they don’t have to do their own research.”

As an example of the kind of work being done by the CCDA, Carter said they’d talked to lots of realtors and determined that the typical new home being built in the county should be approximately 1,400 square feet in size, have three bedrooms and two baths and be priced in the $140,000 to $170,000 range. Such new homes, she said, are ideal for young couples in their 20s who have yet to have children and empty-nest couples in their retirement years who want to live near, but not in, Opelika-Auburn, LaGrange, Newnan and Atlanta. On average, new homes in those higher density population areas run around $40 per square foot more than new homes in Chambers County.

Carter said that she and everyone at the CCDA are pleased with the progress being made at the Lanett airport. A new 5,400-square-foot terminal is coming together as is a 5,400-foot-long runway. The CCDA will have an office in the new terminal, and it should be an ideal place to conduct business. Companies with local ties such as Kia, Ajin, Norbord, Knauf, WestRock and John Soules Foods will find it the perfect place to fly in on corporate jets.

Carter said there’s a growing interest among people who want to rent hangars at the airport, especially with those who fly in to Auburn football games.

Carter is the CCDA’s champion with the branding program. She loves to talk about it and to see it grow. The newest entities with logos are Legacy Acres and Inspire Academy.

Inspire Academy is the new name for the Chambers County Career Technical Center and Legacy Acres is the farm run by the school’s agriculture program.

“What I like best about the new Legacy Acres logo is that it was designed by the students,” Carter said. “They have really bought into it, and that’s great.”

The branding program is in its sixth year, and the “Strength Woven In” theme is widely known. A total of 16 different entities have their own logos.

Carter also talked about the master plan that has been developed for the Lanett Mill site. Carter said there are good prospects there and Tractor Supply has given the site a boost.

“It’s a good business with a good future,” Carter said.

Much of Langdale Mill has been demolished with the debris being hauled off. There’s one remaining section that has potential for redevelopment.

“It has some new areas that were rebuilt after a fire,” Carter said, referring to an incident in 2010.

Fairfax Mill has been leveled for some time, but there’s still much cleanup work to be done. Carter said that a $500,000 Brownfields grant could help. Plans are to have a village green that can be enjoyed by nearby residents.

Carter said that John Soules Foods will be a good corporate citizen for the local area.

Plans are to start production at their plant off Towel Avenue in July 2021. The Tyler, Texas-based company has their main plant in Tyler and another one in Gainesville, Georgia. More than 200 people will be working at the Valley plant at the start of production. When two more lines are added in the coming years, employment could grow to more than 500, making it one of the largest employers in Chambers County.

Carter said that there’s much activity going on right now at the Valley site.

“Construction is underway on three new buildings on the backside,” she said. “They are doing their best to hire local people, and we like that.”

Batson-Cook is building two of the new buildings and Harmon Engineering the third one. Much work needs to be done inside the main building to bring it up to USDA standards, but no major obstacles are expected.

Carter said that close to 1,200 acres of city-owned land in Valley has very good redevelopment prospects.