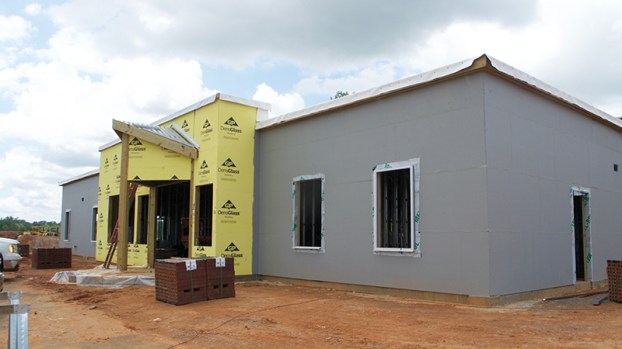 Despite some recent rainy weather, work is rapidly proceeding on the new terminal at Lanett airport. The walls are up, the roof is on and the exteriro brick work will soon start on the 54-00-square-foot building. According to Jody Lowery, the city’s point man on the project, the new terminal could be complete by mid December.--photo by Wayne Clark

LaFAYETTE — The second economic quarter was not good for the local area, the state of Alabama or the U.S., but that didn’t stop the Chambers County Development Authority (CCDA) from doing its work in promoting the county’s economic development.

The months of April, May and June were tough ones with much of the economy shut down due to the shelter-in-place recommendations of the CDC. With economic development being an essential service, the CCDA’s work went on. Kimberly Carter reported on their activities at the Monday meeting of the Chambers County Commission.

The CCDA is addressing the needs of the county for industrial parks. At the Chambers County Industrial Park off Exit 70 on I-85 at Cusseta, Carter reported that 189 acres on the west side of the park have been optioned and the sign along the interstate has been updated. At Valley Industrial Park, Carter said that a master plan had been developed for the Burney site (north side of Fob James Drive) and that it will likely be an industrial or commercial site. Land clearing has been completed on the Combs property off Fairfax Bypass. A portion of the property is slated for residential development. At build-out, several hundred new homes could be located there.

At the Huguley Industrial Park off Phillips Road, some new directional signage will soon be going in to help with the traffic flow, a new traffic signal arm has gone in and new lighting has been installed at the entrance of Huguley Park South.

At the LaFayette Industrial Park, Carter told the commissioners that an Opelika company, Environmental Recycling Solutions, has opened a branch office there and that the CCDA, Kardoes Rubber Company and City of LaFayette officials are working together in the hope of landing a new industry to locate in the new vacant Kardoes building.

“The target date for the opening of John Soules Foods in Valley is July 2021,” Carter said. “Contractors have mobilized on the site, and construction is underway.”

Three new buildings are going up behind the main building off Towel Avenue. Two of them are being built by Batson-Cook with the third one being done by Harmon Engineering of LaFayette.

Last year, the city of Valley purchased the Fairfax Mill site with plans of converting it into green space. Carter said the cleanup work is now underway. Langdale Mill has been largely demolished, but potential investors are looking at options on redeveloping the remaining section.

Carter said that the Hester Tag & Label building on Highway 50 in Lanett had recently expanded. A master plan is almost complete on the Lanett Mill site, which already has a new Tractor Supply store. Carter said she was well pleased with the progress made at the Lanett airport. She said the walls were up and the roof would soon be going on at the 5,400-square-foot terminal building. The new building will have a large lobby, pilot’s lounge, flight planning room and offices for the city and the CCDA. Paving is underway on the new runway addition. When complete, it will be 5,400 feet long, making it one of the longest in east-central Alabama.

Entities are continuing to join the county’s branding initiative. Carter said the Chambers County Career Technical Center and Legacy Acres would be getting their unique “Strength Woven In” logos. Carter said the CCDA is working with the City of Valley to reflect the brand on its new website.

“Our #chamberscharm campaign 2.0 has been completed,” Carter said. “LaFayette is pursuing a Main Street designation, the CCDA is working with the Circle of Care to develop a Chambers County business incubator, and we have a rural broadband initiative underway. The Tallapoosa River Electric Cooperative (TREA) and Point Broadband is helping us with it. We’re also participating in a Beta Test program with Opportunity Alabama: Rural Recovery Accelerator.”

Carter said that there are some opportunities right now for retail development. She said a new restaurant would be located in the former location of Cracker Jack’s in Valley. She said that she’s trying to get the word out about George’s Farmers Market. It’s located between LaFayette and Waverly and is a fun place to be on Friday nights when live music is performed by local talent.

“I have learned more about unemployment and SBA loans than I ever thought I would,” Carter said. “We now have an e-commerce platform on our website. It’s being provided by a company from Iowa and is something of the Amazon for small businesses. We are offering it free for the first year. We encourage our local small businesses to check it out and see if it can be beneficial to you. We are hoping it can provide value in a lot of areas.”

The CCDA staff remained busy during the COVID shutdown. Between the months of January through June 15, the staff spent more than 170 hours assisting local businesses and organizations.