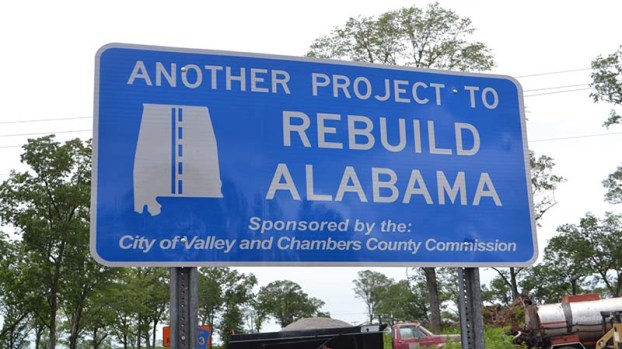 VALLEY — One of the first Rebuild Alabama projects is underway, and it’s taking place inside the Valley city limits.

The resurfacing of Combs Road on the city’s west side is a cooperative effort on the part of the city and the Chambers County Highway Department with the state taking up 80% of the cost, or about $270,000. The city and county will each fund 10% of the cost.

Plans are to have a new housing subdivision on the road and possibly a commercial district. At build-out, there could be several hundred new homes in the subdivision.

Rebuild Alabama was enacted into law by the Alabama Legislature in 2019. It’s the state’s first gasoline tax increase since 1992 and will be fully phased in over a period of several years.

The development will be on the south side of the city’s industrial park and will benefit from the improved water pressure and water volume that will be taking place in the area due to a new water tank and 10-inch lines surrounding the park.

Chambers County Engineer Josh Harvill has done the engineering work for the road improvements, and Chris Clark Grading & Paving will be doing the work.

Rebuild Alabama is a signature accomplishment of Governor Kay Ivey’s administration. She fought hard for the program for nearly four years and persuaded reluctant legislators to do it for the benefit of the people of Alabama.

“What the members of the Alabama Legislature have done today is to improve Alabama’s infrastructure for generations to come,” Ivey said in March of 2019 to reporters.

The facts were clear that the state needed to make some major improvements in its infrastructure. Studies showed that drivers on Alabama roads were more likely to be killed than were drivers in 44 other states. Deficient roadways were to blame for more than one-third of traffic fatalities in the state, and an estimated 60% of the deaths were taking place on rural roads.