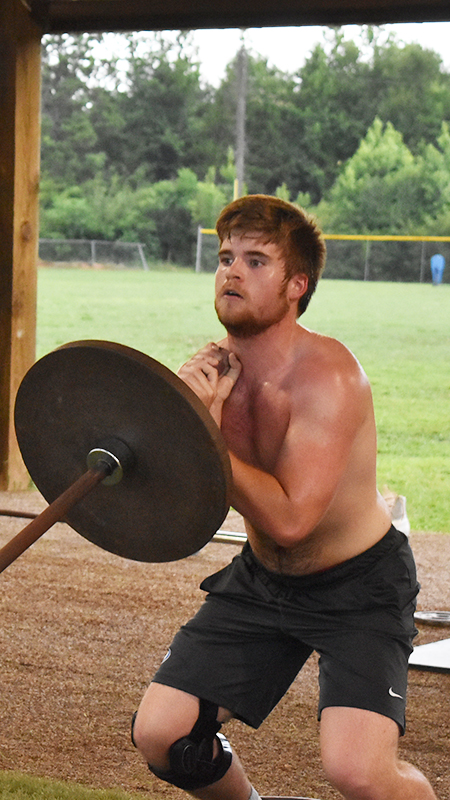 Chambers Academy senior Dean Sheffield does a landmine lift during the Rebels workouts on Monday.--Photo by Cody Estremera

Chambers senior Sheffield to give everything in senior season

For the last three years, No. 55 has made key stops and blocks for the Chambers Academy football team. He has been a starter on both offense and defense playing middle linebacker and on the offensive line the last two years.

Now, in his senior year, Dean Sheffield is planning to leave his mark on the Rebels program.

“It means a lot,” Sheffield said. “This is the last time I’ll be on the football field, so I’ve got a lot to show. I’ve got to make my mark, make sure people remember me because it’s over for me after this.”

Sheffield has worked alongside Braxton Allen, who was one of the best players to come through Chambers Academy, according to head coach Jason Allen. At middle linebacker, he was sandwiched between Gabe Brooks and Jake Waldrop, both of whom are going to play football at Faulkner University in the fall.

Sheffield is one of two returning offensive linemen for the Rebels in 2020, joining Jacob Oliver, who is the left guard.

“I take a lot of pride in it [playing guard],” Sheffield said. “Me and Jacob have been playing guard since the sixth grade, and we’ve been in this system. We know it like the back of our hand. We take pride in going out there and putting some fame to the true Wing-T offense with buck sweeps.”

Since he has been in the offense since he was in middle school, Sheffield knows his role extremely well on the offensive line.

The Rebels played Autauga Academy, who has been to every AISA AA State Championship game since 2016, in a spring game last year. The Rebels had just finished baseball season and only had a week of football practice before the scrimmage.

However, Allen said it looked like they were well-prepared because so many players, like Sheffield and Oliver, have been in the system for many years.

“We’ve been doing it for so long, that it’s just like waking up, taking a shower and putting your shoes on every day,” Sheffield said.

On defense, Sheffield also plays a key gap stop, as he is the starting middle linebacker,.

“To be able to play one, you have to be able to understand how the other side plays, and he has that unique ability to play both,” Allen said. “Dean is a little more undersized, but he makes up for that with his instincts. He’s really smart, so he understands how to play the game with his pad level at a lower level.”

The Rebels allowed an average of 16.7 points a game last year and Sheffield was a major contributor to that success.

“We are a powerhouse on offense, but what backs us up is being able to make those big stops to get our offense back out there,” Sheffield said. “We take a lot of pride in that.”

Along with being a standout on the football team, Sheffield is also a focused student, which he demonstrated during his junior year by making the Chambers Academy Headmaster’s List.

“Dean is a high character guy,” head football coach Jason Allen said. “It starts in the classroom with him. He expects excellence in the classroom, and it carries over onto the field.”