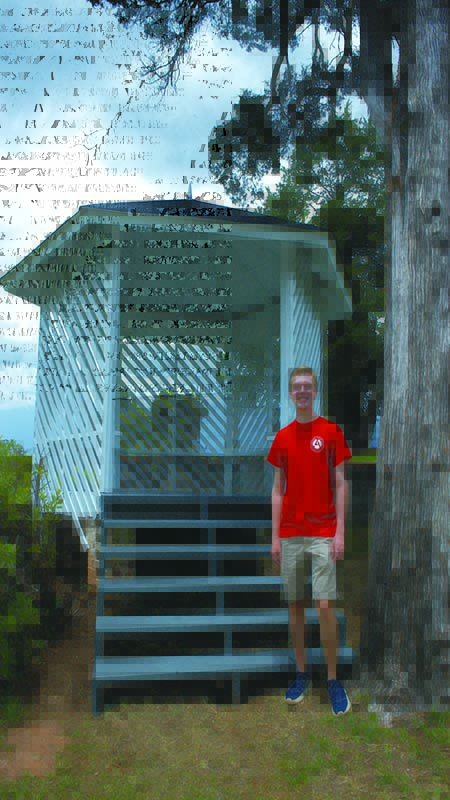 WEST POINT — Jackson Tucker will always remember his 18th birthday. It’s on July 2 and this year falls between his graduation at Troup High and the start of his college education at Georgia Tech, where he will major in chemical engineering. He’ll also remember it as a time for celebrating the successful completion of an Eagle Scout project.

Jackson is the son of the Rev. Thomas and Lisa Tucker of West Point. His dad has been the pastor of the West Point First Baptist Church for the past 13 years. Jackson was born in Scotland and lived with his parents in Prattville for several years before coming to West Point.

His Eagle Scout project was to restore a historic gazebo in West Point’s Pinewood Cemetery.

The gazebo dates to the 1890s and had gotten in really bad shape in recent years. Knowing that the gazebo has a unique place in the city’s history, Chattahoochee Valley Humane Society Board Member Joe Thompson sought ways of getting it restored. Someone had the idea of having it done as a Scout Project, and Thompson sought Joel Finlay, the long-time scoutmaster of Troop 9003, a unit that’s had some amazing success in producing Eagles.

Finlay talked to Jackson about the idea, and he was instantly sold.

That decision may have been a spur of the moment thing, but getting it done took planning, patience, finding good people to work with and a lot of hard work. An Eagle Scout service project is something that will benefit the community and something the Scout must plan, lead, acquire the materials and direct the work.

“It was a lot of work,” Jackson said. “We had to replace the facia board, rebuild the steps, replace three of the lattice strips, re-do the roof, scrape off the old paint, re-prime it and paint it.”

Jackson said that one of the most enjoyable aspects of the project was connecting with some men who really know how to get things done. They include Steve Tramell, Cecil Ramsey and Louis Wessinger.

“Mr. Tramnell helped me with the timeline, suggesting what to do and when,” he said. “Mr. Ramsey did a great job with the roof, and Mr. Wessinger of Batson-Cook Hardware was of huge help in getting the materials we needed. Some of my Scouting friends, Will Bartlett and Sam Johnson, were of big help to me in doing the work.”

Jackson wanted to start the project in March but got sidelined by COVID-19.

“The coronavirus had a different plan for us,” he said.

The original plan was to have it finished by his 18th birthday on July 2. The COVID-19 shutdown meant that more work would have to be done in a shorter period of time once the stay-at-home recommendations were lifted.

“It wasn’t easy, but thankfully it all worked out,” Jackson said. “This has been a great experience for me. I’m really proud to have done something for my community. It’s great to know men like Mr. Steve, Mr. Cecil and Mr. Louis. They are so knowledgeable about what they do and are good at getting things done.”

Pinewood Cemetery is the oldest public cemetery in West Point. Its oldest marked grave is that of John C. Webb, who died in 1840. Since West Point dates to the 1820s, it’s generally believed that there are earlier graves whose markers no longer exist. Prior to 1832, when West Point was named Franklin, all denominations in the town worshipped in a schoolhouse that stood near the present location of Pinewood Cemetery. In 1834, the Methodists built a church on the northwest corner of what’s now Avenue E and East 10th Street. The proximity of these houses of worship most likely accounts for Pinewood’s present location.

Pinewood also contains a Civil War era cemetery that contains the final resting places of 76 men, many of whom died in the April 16, 1865 Battle of West Point. The gravestones that rise to a point mark the burial sites of Confederate soldiers. Those with rounded tops mark the graves of Union soldiers.