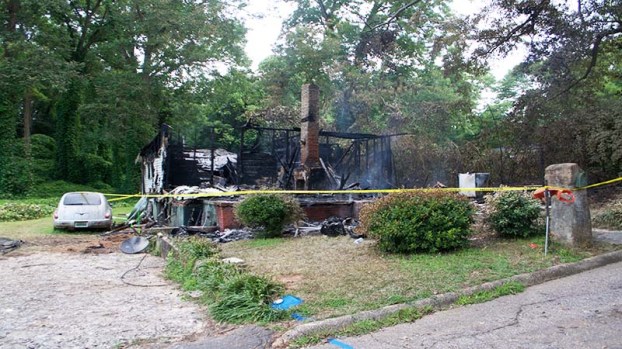 Located between Ebenezer and St. John Baptist churches in Lanett, the above home was lost to fire in the early morning hours on Thursday. A passing motorist noticed the fire at approximately 1 a.m. and contacted 911. Firefighters were on the scene a few minutes later and battled the fire for approximately four hours. “Our guys got back to the station at 5:50 a.m.” said Chief Johnny Allen. "They had already had a rough day. They had to answer 15 EMS calls on Wednesday. They are mentally prepared for days like this. They knew what they signed up for.”

LANETT — A home located on North 10th Street in Lanett was completely gutted by fire in the early morning hours on Thursday.

According to Lanett Fire & EMS Chief Johnny Allen, a passing motorist saw a structure fire at approximately 1 a.m. EDT and called 911. Lanett firefighters were immediately notified by a dispatcher with Chambers County EMA, and they were on the scene within minutes. They received backup help from the Huguley Fire Department.

“There was nothing we could do to save the house,” said Allen. “It was fully involved in flames when we got there. It was an older wood-frame house and was burning from wall to wall, from the floor to the ceiling. There was no way to safely enter it. We have no idea how long it had been burning when we got there.”

The owner of the home was away at the time but drove up when firefighters were there battling the blaze. A total of 11 firefighters from Lanett and Huguley fought the fire for approximately four hours. It was out at approximately 5 a.m.

“My guys got back at the station at 5:50 a.m.,” Allen said. “I can’t say enough about the job they do. Wednesday had been a really rough day for us. We had had 15 EMS calls that day before the fire call came in. Our guys are mentally prepared for the work they do. They knew what they signed up for.”

No one was injured in the fire.

The cause of the fire is being investigated by the Lanett Fire Department and the Lanett Police Department’s detective division. It’s possible the state fire marshal could be called in to assist, but the investigation has yet to advance that far