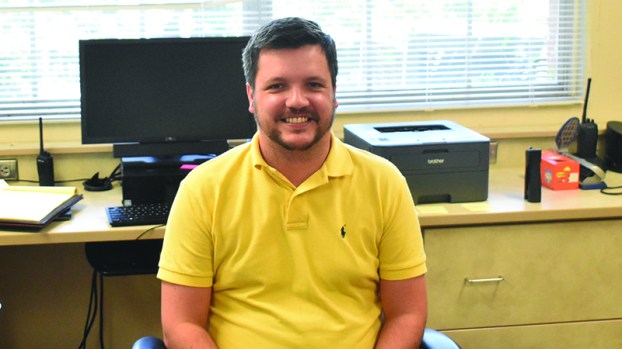 For the last two years, Chad Smith has had his eyes set on becoming a principal. In June, he got his wish.

At the June meeting of the Chambers County School District, the school board unanimously approved the hire of Smith to become principal of W.F. Burns Middle School.

“It was really exciting,” Smith said. “I had been trying to do this for a couple of years. I spent six years as an [assistant principal], after about the fourth one I started looking for things. I really wanted the right opportunity.”

Smith said W.F. Burns isn’t far from his home in Auburn, so he doesn’t have to worry about moving. Also, since he was working in Phenix City School System, he had worked with and knew people that worked in Chambers County.

“I get to stay in the area that I’m familiar with,” Smith said. “I know people that work in Chambers County, all great [people], so I’m excited to be here.”

Smith took an unconventional path to become a principal.

He started at Auburn University. Originally, he planned on trying to become a veterinarian, but after dealing with blood and animal guts, he decided to change paths and pursue a degree in zoology.

Originally, he planned on being a research scientist or a field scientist, since he still is a big fan of animal science, but in his final semester, his plans started to change. He found himself hosting tutoring and study sessions for his fellow classmates.

“I think I really just fell in love with that ‘aha moment’ where you help somebody understand and you know that you’ve accomplished that with them,” Smith said.

He finished his bachelor’s degree in 2008. Around the time, he was finishing his undergraduate degree, he discovered the Alabama Bachelor Certificate, which allows students that have enough hours in their chosen field to begin working toward a teaching career.

He started working in the Montgomery Public Schools System starting as a science teacher. After two years, he finished his teachers’ certification at Opelika High School. He was there for three years total.

In his final year at Opelika High School, he had an assistant principal call him into her office for a meeting.

“I thought I was in trouble,” Smith said. “She said ‘I’m sorry. I didn’t mean to be cryptic. I just see some things in you and wanted to talk about your future.’ I went down there and in 10 minutes, she had me talked into doing the masters in leadership with Auburn.”

He graduated with his master’s degree in 2014, his final year with Opelika.

He moved on to Booker T. Washington, Phenix City Intermediate and South Girard Jr. High School, where he spent time as an assistant principal.

While at Phenix City Intermediate, Bobby Cook, who is the principal, started to groom Smith to become a principal.

“He gave me some responsibilities to help groom me for principalship one day and then I was able to carry that to South Girard with me. I had the same conversation with the principal there, Mr. Carey McDonald,” Smith said. “Both of them are outstanding people, and Mr. McDoanld let me identify some things that I hadn’t gotten my hands on yet, like budgeting and a lot of work with personnel. I basically told him this is what I need to finish my assistant principal career and take the next step, and he allowed me to manage those things.”

In his six years as an assistant principal, one of the biggest accomplishments he played a role in was improving South Girard’s score from a 72 to an 84 on the Alabama State of Education’s School report card.

“A  lot of work went into that, a lot of department meetings, a lot of data meetings,” Smith said.

At the end of the 2018-19 school year, South Girard won the Phenix City Schools Professional Learning Community of the Year Award.

“A bunch of us jumped out of our chairs because we know how much sweat equity went into that,” Smith said.

Because of the COVID-19 pandemic, the first time Smith was able to lay eyes on W.F. Burns Middle School was after June 17, when the board meeting was held.

“My first thought was that it was huge,” Smith said.

Smith’s first day as principal was July 1. The first week at a new job can be hectic, but as a first time principal during a pandemic, Smith’s first month has been a handful.

“It’s been [hectic] in a good way,” Smith said. “It’s exciting because something new is here and it’s not great, but it’s causing us to have opportunities that we didn’t have before. I think we’re trying to look at it from a positive perspective.”

Superintendent Dr. Kelli Hodge mentioned during the July school board meeting was Smith was coming up with a schedule that would allow students to stay in their classrooms while teachers moved room to room.

In order to make this a viable plan, teachers have had to move classrooms. Smith is organizing teachers into teams, which will move together throughout the day so there won’t be an overlap of teachers in the halls.

“I hate to have done that, but it really gives us a neat chance to look at things from a new perspective,” Smith said.