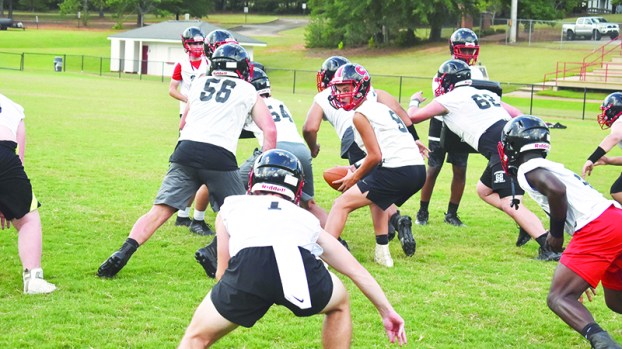 Springwood quarterback Cooper Champion prepares to hand the ball to O.J. Tolbert. Tolbert and Kannon Key, left, are going to be focal points in the Wildcats offense in 2020.

Tolbert, Key to play important role for Springwood in 2020

Since John Gartman took over his role as head coach of the Springwood football team three years ago, the Wildcats have lined up in the Wing-T offense. This has allowed the Wildcats to showcase their running attack.

In 2019, the Wildcats were led by running back O.J. Tolbert and quarterback Jordan Plank, combining for more than 1,800 yards. Alongside them was fullback Kannon Key.

Now entering their senior seasons, the running game is in Tolbert’s and Keys’ hands.

Tolbert started playing for the Wildcats as an eighth-grader. Like most junior high students, Tolbert started on the scout team defense. However, that wasn’t good enough for him.

“When I got here, I was on scout team defense,” Tolbert said. “One day, I just decided to turn into a different animal and said ‘I’m going to be one of the only ones in my grade that start on varsity.”

As Tolbert continued to progress during his eighth-grade season, the Wildcats were working on pursuit drills, where players line up on the defensive line and try to track down a ball carrier.

In those drills, the ball carrier was Shykee Thomas, who went on to play football at Southern University. For the most part, no one on Springwood’s roster could keep up with the future college athlete, except Tolbert.

Before the season was finished, Tolbert was starting.

“Nobody from that defense could touch him,” Tolbert said. “I was one of the fastest besides him. When I got there, they just threw me in the fire.”

When he started playing at Springwood, Tolbert estimated he was roughly about 150 pounds. Now, entering his senior season, he has grown into his body and become one of the strongest players on the Wildcats’ team.

“I just have a higher step, and I’m smarter [getting] to the ball,” Tolbert said. “I know more about the game now since I’ve started since back then.”

Tolbert will resume his roles at running back and linebacker in 2020, and when the Wildcats go into shotgun, he will play quarterback.

Key has played a multitude of roles since Gartman took over the team in 2018, including quarterback, running back, wingback, wide receiver, nose guard, linebacker and defensive back.

The reason that Key has played at so many different spots is because of injuries to other players and his football IQ, which is why Gartman believes he can put the senior anywhere on the field.

“It’s very important because both of your best players are going to play on both sides of the ball,” Gartman said about Key’s versatility. “Kannon is as good of a kid that I’ve ever coached. He’s a very smart, very tough, high character kid, who is very coachable. He’ll do whatever’s asked of him. He’s played a lot of roles for us.”

When asked which position was his favorite, the 5-foot-4, 150-pound senior said nose guard.

“I just like to do different things,” Key said. “When I started playing nose guard, that’s really the most fun position that I’ve played. It’s just fun to be on the defensive side of the ball.”

Playing different roles adds to the excitement of playing, according to Key.

“It’s just knowledge of the game and having fun,” Key said. “If you’re not having fun, why are you playing?”

Barring injuries, Key will be playing halfback and outside linebacker.