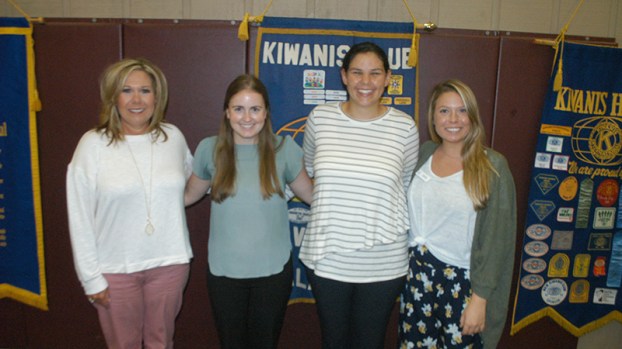 VALLEY — Elite Rehab Solutions opened a new office in Valley almost one year ago. The business will be having their one-year anniversary in mid-October.

During the noon hour on Wednesday, physical therapists Emily Tramutolo and Erin Blackwell and office manager Kayla Baker talked to members of the Kiwanis Club of Valley about Elite Rehab’s first year in Valley. They even demonstrated dry needling and talked about how it targets muscles and joints.

“It’s a form of acupuncture, and it has been around for a while,” Blackwell said. “It is becoming more and more popular as people are discovering how it can reduce pain.”

When administered by a trained person, dry needling can help people with neck pain, back pain, muscle pain, arthritis, bursitis and those who suffer from chronic headaches.

The Valley office is one of 13 Elite Rehab locations in Alabama and Georgia.

“We do a little bit of everything,” Tramutolo said. “We help people who have been injured on the job or in accidents.”

Therapists are skilled in educating people on what’s happening with them and why they are in pain.

“Our goal is to help you get back to doing what you were doing before and with no pain,” said Blackwell

Julie Ambrose, who was a guest at the meeting, said that she had learned from experience that anyone can have problems just because of the way they have been sitting at work for an extended period of time. She said that Elite Rehab therapists had performed dry needling on her, and it had been very effective.  She said that she was a believer in what the rehab personnel can do at both EAMC-Lanier Hospital and Elite Rehab Solutions.

“You have to have a doctor’s referral to see us,” Blackwell said. “Local doctors are good about sending people to us.”

Club member Patsy McKenzie said she’s known people who would swear to her that acupuncture (from which dry needling derived) really worked for them.

“I can remember a couple from West Point who used to take regular trips to Newnan for acupuncture,” she said. “They told me it had really helped them.”

Club member Danny Oliver asked if they worked with knees.

“We love knees,” Blackwell said. “We also work with people who have had hip replacements and shoulder surgeries.”

“We work with athletes who have had sports-related injuries,” Tramutolo said.”We care about our patients and want them to get better.”

Baker said a big advantage of Elite Rehab is that it’s not corporate-owned.

“Several guys got together several years ago to do this to provide this to help people,” she said. “They own the clinic together.”