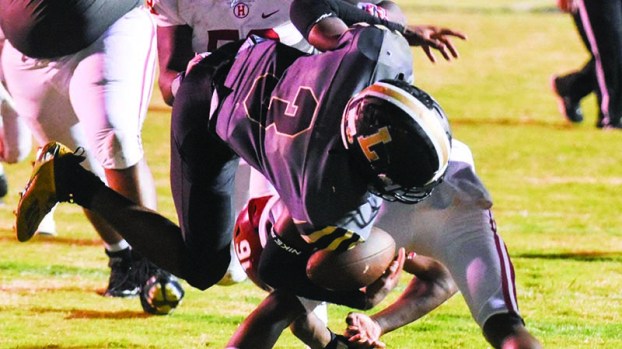 Anyone who missed Friday night’s Lanett-Handley game probably remembers the 2011 Alabama-LSU game, where the Tigers prevailed with a 9-6 win in overtime in a game that lacked a touchdown.

But even that classic matchup was too high scoring to match Friday night’s game at Morgan-Washburn Stadium.

After 48 minutes of tough football, the Panthers and Tigers went to overtime tied 0-0.

Lanett’s Travaunta Abner kicked a 20-yard-field goal on the first possession of overtime to give Lanett a 3-0 lead, but Handley answered with a 5-yard rushing touchdown by Montavious Meadows for a 6-3 victory.

Lanett Head Coach Clifford Story told his team he was proud of them and to keep their heads high after the loss.

“It was a hard-fought game. I take my hat off to Handley. They are a great football team,” Story said. “They are a physical football team. Tonight showed me that my guys had a little more in them than I thought they had.”

The first came when the Panthers reached a first-and-goal in the final minutes of the third quarter. Quarterback Markavious Atkinson was stopped on a hard-fought fourth down run where he broke several tackles and was knocked out the game with a concussion. Kadarius Zackery played quarterback the rest of the way.

“We have packages for both of them, so we know Kadarius is real good running the ball. He was able to exploit some things, but we just couldn’t get in the end zone,” Story said.

Despite a penalty on the play where Atkinson was injured, Lanett turned the ball over on downs.

Three plays later, Handley’s Evan Cofield threw an interception, putting the Panthers back in business at the Handley 20-yard line with 3:17 left in the third quarter.

The Panthers’ offense immediately stalled though. On a fourth-and-four inside the red zone, Zackery just overthrew Larontavious Hurston in the corner of the end zone on what would’ve been a game-changing touchdown.

Neither team could score in the fourth quarter either, though Lanett again drove deep in Handley territory. Zackery was intercepted with 24.5 seconds left inside the Handley 30, and the Tigers ran the clock out to go to overtime.

On the third play of overtime, Zackery ran inside the Handley 2-yard-line, setting up a tough decision for the Panthers.

Story elected to kick a field goal, and stuck with it, even after the Panthers were moved back due to a false start penalty.

Abner nailed the kick, and Lanett temporarily had the lead.

“I went with my gut feeling… in warm ups he was kicking the ball really well,” Story said. “I trusted my gut, and he made it. We just couldn’t keep them out of the end zone.”

It took Handley three plays to answer, with Meadows finally breaking through for a game-winning score. The Tigers dog-piled in the end zone and went running onto the field in celebration.

Lanett has now lost two regular season games for the first time since 2016. Both losses this season were in overtime on last second plays.

“They aren’t used to it, but you can’t win them all,” Story said.

In 2020, football is an up-tempo, high-scoring game, so Story said as a defensive minded coach he really enjoyed Friday night’s old school contest.

“I enjoyed the game, kickoff to the finish. Our defense stood up and they played well,” Story said.

The Panthers play at Vincent next week. Despite the loss, Story said he remains confident in his team moving forward and learned more about them Friday night.

“I’ll take this team on the road and play anybody in the state of Alabama,” Story said.